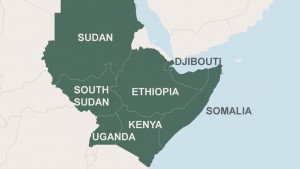 August 22—Talks have been taking place in Entebbe to draft a free movement of people pact to bind members of the Intergovernmental Authority on Development (IGAD) closer together. However the final document is not expected anytime soon.

A consultative process, which began on Monday, is expected to chart a way forward to eventually enable citizens of Djibouti, Eritrea, Ethiopia, Somalia, Sudan, South Sudan, Uganda and Kenya cross their common borders with minimum of fuss. Most of the IGAD states belong to the world’s Least Developed Countries (LDC) with economies dependent on rain-fed agriculture which on average accounts for 70% of total export earnings.

According to 2016 figures of the World Bank and other sources, Sudan posted the highest GDP at $98 billion; Ethiopia, $72 billion and Kenya at $70 billion. Uganda was at $25 billion; Somalia, just over $6 billion; Eritrea, $2.6 billion and Djibouti had a GDP of about $1.7 billion. South Sudan recorded a GDP of $9 billion in 2015, but following the continued instability and slump of oil prices it is now estimated that this has shrank by nearly half.

Amb. Mahboub Maalim, the IGAD Secretary General said, “One of the core ambitions of IGAD was to enable migration. Unfortunately, we have challenges like; internal conflicts in member states which force us to focus on priority areas such as peace, security and disaster management.”

Some 70 % of the IGAD region is made up of arid and semi arid lands, which receive less than 600 mm of rainfall annually. However, the rest of the region has a great variety of climates and landscapes including cool highlands, swamp areas, tropical rain forests and other features typical of an equatorial region.

He said, “Migration is not about to halt. People cross borders every minute. Many of the migrants dying in the Mediterranean Sea are from the IGAD region, yet we could have worked out a mechanism to help them by easing intra-migration. And that is why the entire world is concerned about migration.”

The three-day meeting dubbed ‘The Protocol on Free Movement of Persons in the IGAD Region’, brings together key players in the migration sector, including civil society, academia, private sector, the media,  the police, the military, and the health, internal affairs and foreign affairs ministries.

An IGAD team was also expected to visit Malaba and Busia along the Kenya-Uganda border to meet with officials and other stakeholders about the general landscape for migration. They want to study what can be done to reduce barriers and highlight the benefits of free movement of persons in the region.

Amb. Maalim said the consultations are expected to last until June next year. He said they are going to first have to interact with all member states before coming out with final findings. Uganda was their first stop, from where they will proceed to other member states.