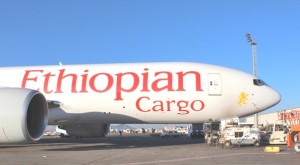 Latest data from the International Air Transport Association (IATA) shows an  increase of 4.5% over the same time period. Demand has been boosted by very strong growth on the trade lanes to and from Asia which increased 80% year-on-year in June (latest available data) and by 65% in the first half of the year.

China has become sub-Saharan Africa’s leading trading partner at nearly $200 billion by the end of 2016.

Ethiopian airlines, Africa’s largest and most profitable carrier, flew the bulk of cargo originating from the continent  and earlier this year unveiled a $150 million state-of-the-art, freight terminal at Bole International Airport. The airline presently has an average daily uplift of 650 tons on top of the belly hold capacity to over 90 destinations in its network with daily average uplift of 150 tons.

The robust growth in air cargo demand is consistent with an uptick in global trade, rising export orders and upbeat business confidence indicators. There are, however, signs that demand growth for air freight may be nearing a peak. Seasonally-adjusted air freight volumes were flat in June and fell in July; and the global inventory-to-sales ratio has stabilized. Air cargo often sees a boost in demand at the beginning of an economic upturn as companies look to restock inventories quickly. This tapers as inventories are adjusted to new demand levels.

Alexandre de Juniac, the IATA’s Director General and CEO said, “July was a strong month for air cargo with double-digit growth. And for the third consecutive month demand for air freight grew at a faster pace than demand for air travel. While the outlook for the rest of the year remains positive, there are signs that the cyclical growth period may be nearing a peak.”

In terms of passenger traffic, African airlines experienced a 6.5% increase in traffic compared to a year ago, down from 9.8% demand growth in June. According to IATA figures African airlines only have 2% of the global market, but capacity rose 1.7%, and load factor jumped 3.4 percentage points to 74.1%. Conditions in the region’s two largest economies continue to diverge, with South Africa in recession while business confidence levels are at a two-year peak in Nigeria.