How Banks fared in 2015: Crane Bank slumps to 23 in industry rankings

May 3, 2016 in Business, Companies, Financial Services by Editor

KAMPALA, MAY 03- Crane Bank lost its no four slot to Baroda in industry rankings judged […]

KAMPALA, MAY 03- Crane Bank lost its no four slot to Baroda in industry rankings judged by profits as 2015 quickly turns out to have been an ‘annus horribilis’ for Uganda’s bankers.

According to rankings released by the Bank of Uganda, Crane slid out of the top 5 Ugandan banks after profits plummeted from Ushs 50.6 billion in 2014 to negative 3 billion in 2015 even as underlying performance remained strong with the bank controlling 8 percent of assets in the banking system.

As earlier predicted by 256BN, Centenary eased into second position with Ushs 101.6 billion in profits for the year and 9.1 percents of total banking assets.

Stanbic maintained its perch at the top of the industry with 17.3 of total assets and Ushs 150.8 billion in profits.

With Ushs 37 billion in profit, DFCU eased from sixth to fifth position in the pecking order. Although it controlled 12.4 percent of assets, Standard Chartered moved from number to number seven after profits plunged from Ushs114.5 billion in 2014 to just 28.3 billion in 2015. 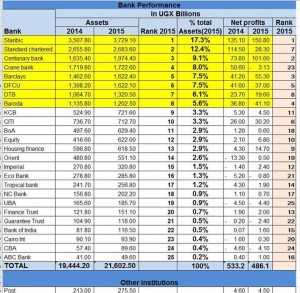