November 1, 2018—Executives at the Abidjan-based African Development Bank (AfDB) are keeping fingers crossed over a […]

November 1, 2018—Executives at the Abidjan-based African Development Bank (AfDB) are keeping fingers crossed over a successful outcome of talks intended to match lenders with borrowers in paying for new infrastructure and exploiting a host of investment opportunities across the continent. 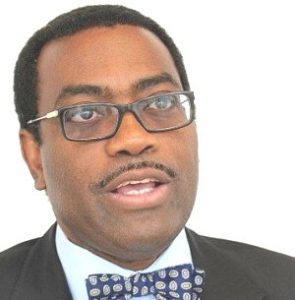 Dr. Adesina’s slogan, ‘I do not seek aid. I seek investment fro Africa’.

The inaugural African Development Bank Investment Forum is taking place at the Sandton Convention Centre, Johannesburg between November 7 and 9. The catch-slogan is provided by AfDB President, Dr. Akinwumi A. Adesina, “I do not seek aid. I seek investment for Africa’.

Foreign direct investment (FDI) flows to Africa slumped to $42 billion in 2017. This was a 21 pc decline from 2016, according to UNCTAD’s World Investment Report 2018.

Closer to home, East Africa, the fastest-growing region in Africa, received $7.6 billion in FDI in 2017, a three percent decline on 2016. Ethiopia absorbed nearly half of this amount, with $3.6 billion (down 10%) and is now the second largest recipient of FDI in Africa. Kenya saw FDI increase to $672 million, up 71%, due to strong domestic demand and inflows in information and communication technology sectors.

According to the AfDB, although brimming with investment opportunities, there is an urgent need to bridge the gap between Africa’s available capital and bankable projects. Financing Africa’s development needs will require an estimated $600 billion to $700 billion per annum. Of this, about $130 billion to $170 billion a year is needed for infrastructure alone.

However UNCTAD thinks  FDI inflows to Africa will increase by about 20 pc in 2018 to $50 billion. The projection is underpinned by the expectations of a continued modest recovery in commodity prices and strengthened inter-regional economic cooperation. On the other hand, Africa’s commodity dependence will cause FDI to remain cyclical.

AfDB Senior Vice President, Charles Boamah says the Bank disbursed a record $5.1 billion to projects and programs across Africa in 2017, an increase of 14 pc over the previous all-time high of $4.5 billion in 2016.

However he adds, “Of all multilateral development banks, African Development Bank operates in the most challenging ‘operating environment’ defined by rating agencies as a reflection of the risks associated with the countries of operation.”

In a statement AfDB said it is working with other multi-lateral development partners and stakeholders to ensure that the Africa Investment Forum becomes Africa’s key springboard for investment and for meeting the continent’s massive infrastructure and development needs.

The Forum will be 100% transaction-based. The focus is on structuring deals, screening and enhancing projects, attracting co-investors, and facilitating transactions to unlock Africa’s multi-billion dollar investment opportunities.