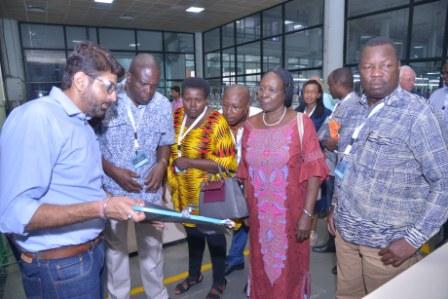 A delegation of Ugandan officials is concluding a visit to Indian and Shri Lanka, on benchmarking […]

A delegation of Ugandan officials is concluding a visit to Indian and Shri Lanka, on benchmarking trip that will inform a strategy for the development of the country’s own cotton, textiles and apparels industry.

Aiming to exploit its potential for economic transformation, foreign exchange earnings, job creation and the multiplier effect, Uganda is about to finalise a strategy for harnessing its cotton textiles and apparel industry.

Flagging off the delegation for the weeklong learning tour on Sunday, Hon. Fredrick Gume Ngobi said the visit would help members acquaint themselves with how governments, the private sector and development partners have worked together to create an enabling environment that has supported highly successful CTA industries in India and Shri Lanka.

India is the largest producer of cotton in the world and the sector is expected to add in excess of USD82 billion annually into the economy by 2021. Sri Lanka, while not a cotton producer, has some of the best-in-class examples of highly vertically integrated textiles and apparel manufacturing plants. The industry employs more than 2.8 million people and contributes more than USD5 billion to the economy annually.

“We are delighted about this visit from which we expect to learn a lot from the two countries as we finalise our own strategy. We will discuss with policy experts and private sector operators how well thought policies can encourage private sector growth,” Gume said.

The National Planning Authority is leading the strategy preparations exercise with the support of Msingi East Africa, which has also facilitated the travel and the ground arrangements. The strategy will be mainstreamed in the National Development Plan III that is under preparation.

Uganda has identified the CTA industry as a key driver in its efforts to transform Uganda into a middle income economy by 2040 and is keen to reform the entire value chain and harness full returns from it. To achieve this however, it needs to give more value to the cotton producers to encourage higher yields. It also needs to clearly articulate the country’s unique selling proposition and attract the right mix of FDI and global buyers to set up in the country and transform the industry.

Accompanied by the Msingi team led by the Board chairman, Linus Gitahi, and the Chief Executive Officer, Ms Aggie Asiimwe-Konde, the delegation includes the top leadership of agencies like the National Planning Authority, the Uganda Investments Authority, and the Uganda Manufacturers Association, the Uganda Export Promotion Board, the Uganda Freezones Authority, the Operation Wealth Creation programme and Members of Parliament.