High-level talks get Uganda SGR project back on track

August 2, 2018 in Finance, Infrastructure by Editor 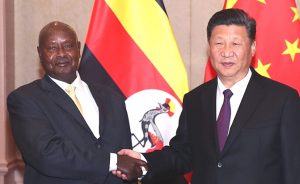 Museveni and Jinping met on the sidelines of the 10th BRICS Summit in South Africa recently.

August 2, 2018—Some new headway has been made on building of the proposed $2.2 billion Standard Gauge Railway (SGR) after Chinese President Xi Jinping and President Yoweri Museveni held talks on the sidelines of the 10th BRICS Summit hosted by South Africa recently.

The project had stalled mainly due to a more cautionary stance adopted by the Chinese government towards new lending to African governments and the capacity for borrowers to pay back. Nearly half of Uganda’s foreign debt is held by China and specifically the Eximbank.

In a statement, Museveni said,“In the transport sector, we have agreed with a Chinese company called China Harbours Engineering Company (CHEC) on the Standard Gauge Railway.  We are soon signing the agreement and together with CHEC, we will approach Eximbank for financing.”

The Uganda SGR, linking Kampala to Malaba along the eastern border, was first mooted nearly five years ago as a regional initiative involving Kenya, Rwanda and Tanzania.  However the initial plan for a joint financing from China was shelved as governments went it alone. Kenya finished construction of the $3.2 billion Mombasa-Nairobi leg in August last year, but after a year of operation the Madaraka line reportedty made losses of $100 million mainly due to slow uptakeof the freight services.

Museveni said government contracts worth $2.4 billion have been awarded to Chinese companies especially for roads and recently security cameras worth $120,259,686.  Museveni told Jinping of the government’s appreciation for support towards the construction of the Karuma (600MW) and Isimba (183MW) dams. Completion of the Karuma is at 79.2 pc while Isimba is at 80 pc.

Jinping said, “The development strategies of the two countries are compatible and present each other with important opportunities. Our two countries should maintain the momentum of high-level exchanges and continue to support each other on issues of their core interests and major concern.”

Museveni said Guanzhou DongSong Energy Group, which is undertaking construction of the phosphate fertilizer, glass and sulfuric acid factory, is being backed by the Chinese government insurance firm to mitigate its risk in the project. This has enabled the Group to get a $650 million loan from the Commercial Bank of China.

He asked Jinping for a Chinese government line of credit to allow Ugandan companies to buy factory machine tools from China especially for processing of agricultural products and mineral processing.  The Uganda government has already made requests for the electrification for industrial parks (Kapeeka, Sukuru and Mbale Industrial Parks) at an estimate $182 million.