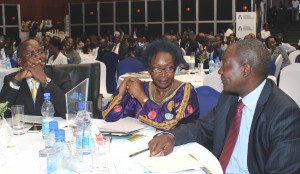 July 20—Prof. Emmanuel Tumusiime Mutebile, the Governor, Bank of Uganda (BoU) said the future of the country’s banking industry is very bright, but deliberately made no reference to Crane Bank formerly the fourth largest, which  BoU put under receivership earlier this year.

Currently, BoU is taking legal action against the former owner, Sudhir Ruparelia, over claims of fraud and other malpractices that saw Crane plummet into insolvency and its viable assets sold off to dfcu Bank.

“I think the future of the industry is very bright and banking is one of the leading industries in Uganda, contrary to what you see in social media,” Mutebile said.

He was speaking during the inaugural Uganda Bankers Association Annual Bankers Conference held in mid-week under the theme, ‘The future of banking in Uganda’.

The Governor said the major strength of Uganda’s banks is lending to the private sector, but in recent years this has been falling off. “In the first decade of this century, lending grew four-fold. However since 2011, there has been no growth in real terms,” Mutebile said.

However he conceded that the high levels of non-performing loans during the economic slowdown of 2016 had a negative effect and caused banks to become more wary and reluctant to lend.

At present, the lowest prime rate offered by commercial banks, is at 18% after the BoU cut its benchmark CBR to 10% from 11% in June.  This time last year the CBR was 15% while the friendliest commercial bank lender was charging 23%. Mutebile reminded banks to offer rates more closer in line with the CBR.

“The ability of borrowers to service their loans is not independent of the interest rates being charged. High rates make it difficult to service loans,” he said.

Mutebile said there is a need to reduce interest rates in a sustainable manner and cited the high operating costs of Uganda’s banks which also made it hard for them to offer cheaper credit.

He said unless banks make cuts in their operating costs, interest rates will not fall in a sustainable manner and create an atmosphere that resulted in the situation in Kenya of regulated rates.

Speaking on how to reduce costs without compromising customer services, Mutebile spotlighted innovative technology and commended banks for taking it up. ‘Adoption of mobile and ATMs can help reduce costs but mean lower employment of humans. But these new technologies must also offer the same level of services,” he said.

As a knock-on effect, he said new technology also puts banks at risk of cyber attacks, all of which have implications for bank supervision which is the BoU’s role. He said although operating risks have become higher, banks must maintain have in place security measures that inspire customer confidence.

Edward Ssekandi, the Vice President of Uganda asked banks and other financial institutions to re-examine their systems to align with the government’s Nation Development Plan and Vision 2040.

He said the government has faith in BoU’s ability to oversee the banking industry, but requested Uganda’s banks to continue with financial deepening and reach the unbanked. Ssekandi also reminded bankers the agricultural sector, where most Ugandans are employed, needed their help.

In its suit against Crane, BoU wants to recover $93.8 million and UGX 60.3 billion, together with the freehold titles to bank’s branches, general damages, interest and costs.