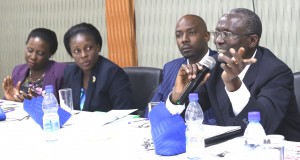 Dr. Ngategize explains a point during the forum alongside, Jabo, the UFZA boss.

October 20—Business people in Uganda have been advised to seriously look at the new economic zones as a chance to expand their enterprises and improve the country’s export receipts, because of the incentives being offered to tenants.

“Ugandan investors should wake up and take up the opportunities available in the gazetted business free zones across the country. These zones have incentives attached which can support our local investors to expand their businesses. This will not only help in solving the problem of unemployment, but also a key milestone in supporting economic growth in the country,” Uganda Free Zones Authority (UFZA) Executive Director, Richard Jabo said during a business forum in Kampala this week.

Incentives include exemption from tax on income from agro-processing, exemption from capital gains tax on plant and machinery used in the Free Zone for five years. However business people have told 256BN their reluctance to take up the government invitation is based on past experience. “The government often made promises it cannot fulfill. Just look at the Kampala Industrial Park. It is only developing now after 10 years, because the infrastructure is being installed,” a maker of confectioneries told 256BN.

The forum was organised to detail the advantages that come with setting up in the free zones for the general manufacturing, textiles and garments, pharmaceuticals and cosmetics.

Jabo said Uganda is strategically located which gives it economic advantages  compared to other neighbouring countries, but  the country is still doing badly in terms of  balance of trade. This can only be solved if the private sector increases on the goods and services produced for exports.

“There’s high demand for manufactured goods, textiles and garments among our neighbours, but such opportunities have not been taken up by our local private sector. Yet the government has put in place infrastructure and policies to support the local private sector to participate in both local regional and International markets,” he said.

Establishment of the UFZA was a key policy move and 12 economic free zones have been distributed across the country. Jabo said these are suitable for the local Investors to set up industries under the Free Zones Arrangement.

A Free Zone is a designated area in which enterprises are taxed very lightly or not all, mostly with a view of encouraging exports. Some of the free zones are located in Jinja, Wakiso,  Mbale, Tororo and Soroti among other parts of the country. UFZA has so far granted over eight licenses to investors to develop Free zones, including cut-flower exporting companies.

Dr. Peter Ngategize, the Head of Private Sector Unit in the Ministry of Finance Planning and Economic Development said Uganda’s export performance is still not at its best. Uganda’s exports grew by 20.7% year-on-year basis while the cost of imports increased by 6.2%.

Quoting statistics from Bank of Uganda,  Ngategize said the country’s  exports increased to $288.19 million, on the back of higher earnings from coffee – which rose 118.2% year on year – and informal cross-border trade export earnings, which increased by 43.3% to $47 million.

“The trade flows mean Uganda’s trade deficit in March 2017 was $85.1million, a year-on-year decline of 24.6%. This marked deficit is bound to be closed by a number of interventions including the Free Zones scheme,” he said.

Some participants however queried the provision that goods produced inside the zones cannot be sold in local and regional markets. “Free zones are good but the law is too strict because 80% of the goods should be exported allowing only 20% on the East African Community market. Many of our local companies have not yet invested in the technologies which can enable them to produce quality goods which can out compete those from developed countries,” one participant said.