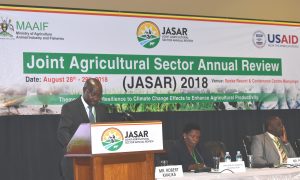 Kasajja said the scheme will make it easier for farmers to borrow from financial institutions.

August 31, 2018—Plans have been mooted by the government, to expand this financial year (2018/19), an insurance scheme for farmers to make it easier for them to borrow money since banks consider agriculture a high risk sector to offer credit. In introduced last year, agriculture officials say the scheme has proven to be useful.

“We want all our farmers to get involved in agriculture insurance. The scheme will support them in accessing to agriculture loans which is still a big challenge. The more farmers access these loans, chances are high to transform them from subsistence farmers to commercial ones which is our target if we are to fight poverty among the rural dwellers,” Pius Wakabi Kasajja, agriculture ministry permanent secretary told participants at the annual Ministry review this week. He said the scheme will help limit the impact of adverse weather on

Agriculture is the top employer in Uganda at 70 pc, but its contribution to GDP has fallen to below 30 pc from a high of 70 pc in the late 1990s, as services and manufacturing have made gains. Experts believe chronic under-funding and the slow shift from subsistence to commercial farming continue to hamper improved agricultural productivity.

Like many other African governments that signed the Maputo Declaration, Uganda has been unable to allocate 10pc of the annual budget to agriculture. This financial year agriculture is to get UGX892 billion ($236 million) up from UGX865 billion, but substantially less than the UGX4 trillion $1 billion) being spent on infrastructure.

Wakabi said the insurance scheme will help encourage commercial banks to lend more money to farmers given that the risk associated with  agriculture will be  mitigated through this cover.

Mario Mangu-Acel, the National Chairperson of the Eastern and Southern Africa Small Scale Farmers’ Forum (ESSAF) said the scheme can help farmers to mitigate the impact of climate change.

“The insurance scheme is good for farmers especially small-scale farmers, but the challenge is that most Ugandan farmers are still ignorant about insurance values thus this calls for the government to carry out massive sensitization if farmers are to embrace the scheme.”

Wakabi said all the necessary legal instruments have been finalised and the  Insurance  Regulatory  Authority will provide oversight. “The two regulators are working tireless to see that the Uganda Agriculture Insurance Scheme is implemented in the country. Bank of Uganda on the other hand will be managing the draw down on UAIS Account. We have put in place monitoring and evaluation of the scheme which is being done by the UAIS Technical working team and so far over 54,000 farmers have benefited from the pilot scheme. In the financial year 2017/2018 the insured farmers who lost their crops and livestock were compensated and prepared for the coming season,” he said.