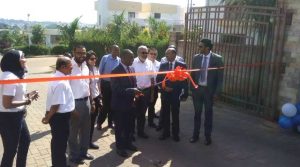 Bahati cuts the ribbon to officially open the latest phase of a housing project being developed by Royal Palm Estates.

Junior finance minister, David Bahati said on Thursday an additional UGX 500 billion (just over $131 million) is being injected into UDBL and plans are to allow young Ugandans to borrow money from HFB at 12%. UDBL is wholly owned by the government while the National Social Security Fund holds a 50 pc stake in HFB and the remaining bulk of shares is owned by the government through the finance minister.

“We are aware that the current loan rates of about 24% are unfavourable for any business, much less investing in real estate. That is why we are putting aside money in our government banks where we can control the interest rates,” he said.

Bahati was responding to comments made by Pradip Karia, the Property Services Limited (PSL) chairman and partner in the Royal Palms Estates on Thursday. Karia  asked the government to lobby commercial banks in providing affordable loans so that more Ugandans can own homes.

Karia said current interest rates of above 20 pc are much higher than in the neighbouring countries and limit willing home buyers to get mortgages. On the other hand, the present Central Bank Rate is at  nine percent.

Leo Courts is composed of three to five-bed roomed stand alone houses that are built specifically to suit the needs of a middle-income family. Prices range from $145,000 to $325,000. To date and in its seventh year the project has delivered over 500 housing units.