April 3, 2018—The government has told off environment lobbyists and those against the continued expansion of […]

April 3, 2018—The government has told off environment lobbyists and those against the continued expansion of palm oil production in Uganda to look at the bright side instead of consistently criticising efforts to make the country self-sufficient in vegetable oil. Uganda has been growing the commodity on a commercial level since the early 2000s mainly in the lake district of Kalangala. 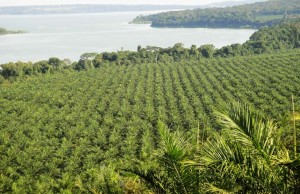 “Under the oil palm component, 6,500 hectares have been planted by the nucleus estates in Kalangala which is 100% of the target. Small holder farmers  have planted  so far 4,424 hectares  of palm oil trees which is 94%.This has enabled the net farm income  from  palm oil project  to the farmers  to go up to  an average of $1384 per hectare  per year.

The  VODP II  started  in October 2010 and its being implemented  by the Ministry of Agriculture Animal industry  and Fisheries over an eight-year period with completion set for the end of the year. The total cost of the project  is $147.2 million and its major objective is to  increase  the domestic  production of  vegetable oil  and its by-products  thus raising  the farmers incomes and also ensure there is constant supply of  affordable  vegetable oil products  to Ugandan consumers.  The largest private sector player in the industry is Bidco Uganda Limited who have been around for more than 10 years.

Ssempijja said, “The project has not only benefited farmers, but the districts at large because of the infrastructure developments which are associated with the projects such as piped water, solar energy and construction of about 250 kilometres of farm roads.”

According to the report, the project  has contributed to increased capacity building in Kalangala especially for the growers of oil palm trees. There have been recorded improvements in book-keeping while farmers have also been trained in group formation and cohesion to increase their bargaining power. Women have been especially targeted as a way to improve livelihoods.

Ssempijja said before the project, many islanders from Kalangala and Buvuma were depending on fishing and charcoal burning. However growing palm oil trees has provided higher earnings.

On the other hand, environmental groups like Friends of the Earth say palm oil production steadily degrades the soil and depletes forest cover over wide areas which leads to destroyed eco-systems.

The report states although farmers are largely satisfied with the project, there are concerns over limited access to quality pesticides and problems with weeding the trees. Millers report an increase in the supply of raw material  from crushing  since VODP II has linked them to more  farmers. Millers have also benefited from the project  inform of improved  skills  in production of quality vegetable oil.