February 9—Market forces are causing the recent fuel price rise in Uganda and there is little the government can do about it, accept continue to watch the situation. 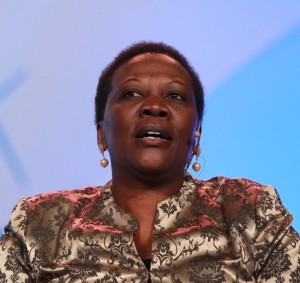 “Uganda is a net importer of petroleum products in a liberalized downstream petroleum market and the prices are purely determined by forces of demand and supply,” Eng. Irene Muloni (right), the energy minister said in an official statement  during mid-week.

She said the increases in pump prices is due to the interplay of the rise in crude prices and refinery premiums on the global market.

Late last year, Dr. Ruhukana Rugunda, the Prime Minister said much the same thing, but continued loud clamours in parliament over the issue has forced the government to once again clarify on the issue.

Fuel prices have been on the increases since September 2017 from UGX3,378 for petrol and UGX2,940 for diesel in September to UGX3,900 and UGX3,250 respectively registered on January 18, 2018. Compared to other East African countries, the prices in Uganda are lower than those in Rwanda but slightly higher than Kenya and Tanzania.

The rise in crude oil prices is explained by a huge storm in United States that led to the shut down many of the production sites and refineries along the United States Gulf cost.

Eng. Muloni further said Uganda continues to enjoy stable import and flow of petroleum products and still has enough reserves. However fuel prices will continue to respond to forces of demand and supply in a free market economy.

“Other factors like taxes, transport , handling costs have been constant so the only reason for the high prices is the interplay of the rise in crude prices and refinery premiums (since we import refined products only),” Muloni said.

She said the Ministry will continue to monitor the sub-sector and engage the oil marketing companies to ensure that citizens continue to get value for money from consumption of petroleum products.