August 18—The government has been cautioned on the merits of offering tax incentives as a way to lure new investments to Uganda when there is a greater need to maximize revenue collection and balance the budget. 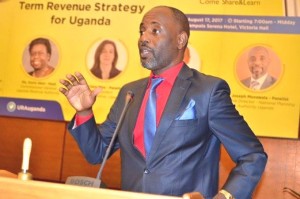 Dr. Muvawara reminded participants that Uganda’s tax to GDP ratio at 15.5% remains the lowest in the East African region.

“We give these tax incentives, because we think it brings investment. But we found that tax incentives rate number 13 and 14 on the priority list of international businesses when they decide to invest in a country. If they (investors) are coming for oil, gold and coffee, they will still come, because these things are here today. You don’t have to pay them,” Logan Wort, the Executive Secretary of the African Tax Administration Forum said.

He was speaking during the 10th  Uganda Revenue Authority Open  Minds Forum held in Kampala this week. Wort said Africa as continent annually loses about $38.6 billion in revenue, because of these incentives and this has slowed any efforts to widen tax bases in most developing economies.

The International Monetary Fund does not approve of tax incentives either. According to the IMF, countries often face pressures to attract investment by offering tax incentives, which then erode the countries’ tax bases with little demonstrable benefit in terms of increased investment.

Under the theme, ‘Developing a Medium Revenue Strategy for Uganda’, keynote speaker,  Dr Joseph Muvawara, the Executive Director of National Planning Authority said for URA to collect more domestic revenue the government should centralize revenue collection as opposed to the current situation where many government agencies collect non-tax revenue.

“The current situation under which both domestic and non-tax revenue are mobilized from the public is a challenge. Every government agency collects money from the public, but on many occasions such dues are not transferred to the Consolidated Fund at the Bank of Uganda due to many leakages. The government, through Parliament, should empower URA to be the single revenue collector in Uganda,” Dr. Muvawara said.

Dr. Muvawara said Uganda’s tax to GDP ratio stands at 15.5%, the lowest in the East African region. He said this situation affects the government’s capacity to finance its budget.  He said if all the leakages in tax collection are closed, URA has the capacity to mobilize  domestic revenue from the general public.

The Forum was held at the time when the country is experiencing a decline in international trade taxes and consequently an increasing reliance on domestic sources. In this financial year URA is expected to raise about UGX 15 trillion (just over $4 billion) if the government is to finance a greater part of  UGX 29 trillion budget.

Doris  Akol, the URA  Commissioner General,  said for Uganda to achieve middle income status by 2020  revenue  mobilization  needs to grow  in tandem  with government  expenditure needs. However the big challenge is that the majority of the businesses are in informal sector.