July 24, 2018—Works and transport minister, Monica Azuba Ntege has today,  issued a statement amidst continued controversy about the plan to relaunch the national carrier.

She told a news conference, “Ugandans have been incurring $540 million per year in extra costs while traveling in and outside the country because we lacked a national airline. This will be no more. The airline will reduce the cost of traveling for Ugandans.”

Azuba said once the airline is back in the air, it will not only improve Uganda’s image, but also act as a way to attract more tourism for the country.”The airline is not primarily profit oriented, it will be used by government officials in all their travels as well as by our sports men and women. This will help government on cutting costs it has been incurring in transporting its officials,” she said

However she said measures were being put in place to make sure the airline is not misused by officials for personal travel since this is one of the reasons that has led to its liquidation in 2001.

Below is the full statement:

‘After the collapse of the East African Community in 1977 and the subsequent dissolution of the EA Airways, the Government of Uganda established Uganda Airlines as its National Carrier.
The Airlines was initially ran as a profitable and viable undertaking but towards the mid- 1990’s it ran into severe problems which forced Government to wind up its operations.

As a result of the airline liquidation in 2001, Uganda was left without a National Airline, hence leaving the services and fares of air travel at the mercy of foreign airlines who in most cases took advantage to overcharge and at times mishandle Ugandan travellers.  The absence of a National Airline has also adversely affected foreign visitors and tourists traveling to and from Uganda.

The Government therefore has taken a decision to revive the National Airline as announced by H.E. The President in January 2017.  The effort to revive the national Airline is premised on the desire to improve the overall growth of Uganda’s air transport sector, by enhancing its competitiveness and turning its International Airport into a Regional transport hub.

Revival of the National Airline is based on;
1)    The need to enhance the country’s competitiveness by reducing the cost of air transport and easing connectivity to and from Uganda.

2)    To support faster harnessing of opportunities in the economy to promote tourism, agriculture, minerals, oil and gas.

‘In order to move forward the process of reviving the airline, H.E. The President on 01/08/2017 appointed a Task Force of Pilots and Aviation experts to support the Ministry of Works and Transport to develop a Business Plan and road map to ensure that the airline starts operations within a defied time frame. 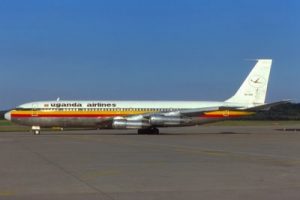 When the national carrier is relaunched, it will be flying Airbus aircraft instead of Boeings for the long-haul flights.

The Task Force was also required to undertake economic and risk assessment of the Project, identify a strategic business model and carry out financial projections, capital structure and operational data, among others.

On the basis of the Cabinet approval the Task Force undertook detailed engagements with various aircraft manufacturers, including M/s Boeing, who submitted that their proposals for technical analysis to come up with the best choice.  Thereafter submissions were made to the Contracts Committee for approval of the MoU’s/orders developed after the engagements.  The approvals were granted in late March, 2018 paving way for signing of the MoU’s with the suppliers and payment commitment fees of $400,000 and $ 800,000 to M/s Bombardier and Airbus, respectively, to facilitate start of the aircraft manufacture.

Payment of the commitment fees was followed by preparation of detailed bid documents which were shared with the two firms. Negotiation of purchase agreement for (4) Regional Aircrafts with Bombardier has been concluded and the agreement signed thus paving way for payment of the pre-delivery money.  The one with Airbus is yet to be concluded.

On 14/05/2018, I presented an information paper to Cabinet to brief members on the progress made to revive the airline.  Cabinet tasked me to provide more information on the following issues:

–    The Choice of Airbus plan over Boeing
–    The reasons for opting for Aircraft purchase, instead of leasing
–    Why the Airbus A330-800 neo series was chosen.

A comprehensive explanation on the above issues was presented to Cabinet on 09/07/2018 and exhaustively discussed.’

Meanwhile the Minister has also come out to correct an article in the East African weekly that questions the choice of Airbus.

‘The Headline of the Newspaper ‘Uganda Airlines to fly the unwanted Airbus 300 neo’. This statement is misleading as it seems to suggest that the A330neo is an unwanted aircraft while the opposite is in fact true. Industry figures show that the A330 family of aircraft is the most popular aircraft in its class and is preferred by the majority of airlines worldwide. The A330 family of aircraft has the largest customer base in its class with 105 customers worldwide compared with only 41 customers for its direct competitor the B787.

b) Misrepresentation of the order cancellation by Hawaiian Airline as an example: There are many reasons why an airline may cancel an aircraft order and Hawaiian has not disclosed its reasons. However what is clear is that Hawaiian Airlines had performed an aircraft evaluation, similar to what Uganda Airlines has done, and had initially also selected the A330-800neo for the same good reasons which include, its range payload advantage, its fuel efficient new engine, revamped cabin and other enhancements in comparison with other aircraft types including the B787 which they have now reverted to. This example reinforces the advantage of the A330 neo. The change of order by the Airline was mainly on Political grounds according to our sources.

c) Lack of understanding of the aircraft “family concept”. Aircrafts are manufactured on a “family basis concept (Airbus, Boeing, etc with similar commonality in terms of fuselage, technology and operational features. The A330 neo therefore is essentially the same aircraft as the previous version namely the A330 ceo (common engine option which was the A330-200 and the A330-300) for which Airbus has more than 1,700 orders. The new engine option (neo) brings additional operating efficiencies to this aircraft family and uses a better more technologically advanced engine and that is why it is called the “neo”. The A330-800 is therefore not a new aircraft but an enhancement of the existing variant.

d) Similarly the airbus 330 800 neo is not “in development” as alleged in the article: this is a misunderstanding of family concept. The A330neo (A330-900 variant) is already delivered to other customers such as TAP Portugal and is flying today. This is the bigger version of the neo series and has the same new engines and improved technologies as the 800 version selected by Uganda Airlines. The A330-800 variant will have a shorter fuselage allowing it to fly longer and further than the current 900 version. This range payload performance is what is required for Uganda Airlines to operate non-stop flights on long routes to China and the Far East. It is important therefore to understand that the A330-800neo is not an aircraft being designed from scratch but is already within the family as the A330-200 version.

In addition, the A330 has a large operator base with 99% spares commonality across the fleets making it easy to maintain: a key component in aircraft selection is the availability of spares and support arrangements for the aircraft across the intended network. The 99% commonality across the A330 family (from the A330-200/300 up to the A330-800/900) in terms of spares and components lowers the potential cost of maintenance for this aircraft compered to others. This enables maintenance services to be shared across airlines with spares being available in many places worldwide and reduces inventory levels and operating costs for the airline.

In conclusion, the A330 was found to be the best entry level wide body aircraft in its class: in the past 5 years, 2014-2018, a total of 30 airlines started long haul flights for the first time with new technology aircraft around the world. Out of these 26 airlines chose the A330 as their start up aircraft while only 4 airlines chose the competitor Boeing 787 as their first wide-body. This is an 87% confidence verdict in favour of the A330 for long-haul operation start-up, compared to the 787 on account of the A330 good performance and lower financial cost.

In yesterday’s daily Monitor it was alleged that Uganda hurriedly firmed up plans to revamp the defunct airline and that the Project is being operated in such an adhoc manner. It is important to note that the process to revive the airline was stared in 2013 on the basis of an analysis and recommendation made by the Presidential Economic Commission (PEC). This was followed by a study carried out by the Uganda Development Corporation (UDC) and another study conducted by Ernest and Young (EY) on instructions of the Civil Aviation Authority. In 2015 the National Planning Authority undertook an in-house study and developed a Feasibility Study which formed a basis for further analysis’.