October 11, 2017 in Companies, Investment by Editor 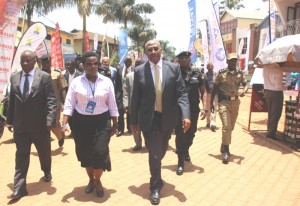 Dr. Rugunda (right) being welcomed at the showground by Barbara Mulwana last week.

October 11–Prime Minister Dr Ruhakana Rugunda made a promise to support local industries when the need arises after demands for preferential treatment were once again made when he was officially launching the week-long 25th Uganda Manufacturer’s Association (UMA) International Trade Fair,

“There is no need for you people suffering when the government is there, because it exist to solve your problems. These issues once you bring them to us will be solved.” he was welcomed by Barbara Mulwana, the current UMA Chairman at the showgrounds.

The Fair ended yesterday under the theme ‘Transforming the Economy through industrialization’.

The manufacturers want more protection for local industries against stiff competition from imported commodities and also for the government to prioritize them when purchasing products such as the refugee consumable items like foodstuff and beverages, utensils and mattresses.

Richard Mubiru, a UMA board member, said local businesspeople continue to face hurdles which are limiting production and expansion. Speaking on behalf of his colleagues, Mubiru expressed the general concern about  the high tariffs they pay even when President Museveni had called for some adjustments downwards.

Mubiru also spoke about the slow rate of installing essential infrastructure at the Namanve Industrial Park, which has been under development for nearly 20 years with original seed money coming from the World Bank.  Industrial activity at Namanve remains largely muted with many medium-scale investors relinquishing their plots after the government repossessed them for lack of implementing their projects.

Constant congestion along the single-lane road between Mukono, Namanve and Kampala is also a contributing factor to the slow development of the industrial park.

In response, Dr. Rugunda asked UMA to compile a formal report about their challenges so that the government can address them. However one pessimistic factory owner told 256BN, this is not the first time that UMA is telling the government of their concerns. “Every year, someone comes to the show and makes a speech, but in truth nothing gets done. Our problems are not impossible to solve. The problem is that no one wants to take the responsibility ad act on,” he said.

On the issue of traffic congestion on Jinja Road between Mukono and Namanve, Rugunda promised to engage the Minster of Works to find a quick solution.