Government asked to get better grip on infrastructure projects

July 19, 2018—Accountants have asked the government to get a better grip on infrastructure development by […]

July 19, 2018—Accountants have asked the government to get a better grip on infrastructure development by having a clear-cut plan of execution that also involves higher local content and eliminates drawbacks such as compensation squabbles which cause delays. 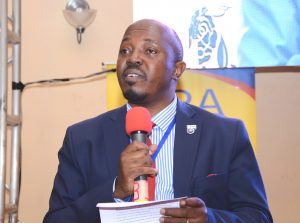 Kibbedi said there is need for harmonisation of various projects to prevent interruptions and other costly complications.

The Institute of Certified Public Accountants of Uganda (ICPAU), the national body for professional accountants in Uganda, has advised the government to draw a long term plan so that in the long run, these heavily funded projects are not interrupted by new ones.

The CPA Economic Forum is an annual event organised by ICPAU for all certified accountants to share, learn and review the sector as well as discuss major economic conditions in the country. Kibbedi said there is a need for the government to plan ahead and make sure all national projects are coordinated.

“While developing these projects, there is need for harmonisation, coordination and collaboration of various agencies in the infrastructure chain so that they are no delays or interruptions in future. Make sure that the standard gauge railway (SGR) project is planned together with the rural electrification program so that one does not interrupt the other which will lead to huge losses for Uganda,” he said.

On information and technology, he asked the government to rethink the social media tax at UGX200 daily (or less than one US cent) that might cripple home-grown ICT innovations.

He said, “We are still hoping that government will still rethink the social media tax, because social media is an enabler of most of those innovations. Government should instead put in place support mechanisms to enable take off and diffusion of such innovations.”

Meanwhile the government announced in mid-week an amendment to be tabled in parliament today, to reduce the mobile money transaction tax down to 0.5 percent from one percent, but maintain the social media tax at UGX200.

In his remarks, Kibbedi appreciated the government allocation of over UGX149 billion (nearly $40 million) for the ICT sector this financial year and the plans of developing regional ICT innovation hubs.

Dr. Patrick Birungi, the Director Development Planning at the National Planning Authority (NPA) who presented the keynote address said on behalf of NPA chairman Kisamba Mugerwa said if Uganda is to achieve its vision of transforming society from predominantly peasant to a modern and prosperous country within 30 years,  it will need to control its population that is growing at a rapid 3.3 percent.

“This perspective vision aspiration means changing the country from a predominantly low income to a competitive upper middle income country with a per capita income of $9,500 by 2040. For economic growth dimension target is to achieve per capita income of $1,039 (UGX5 million). This requires GDP growth rate averaging to 6.4% over the five years of NDPII implementation assuming the population growth is kept at no more than 3%.”