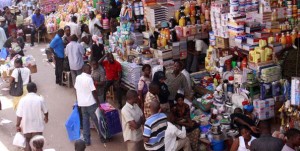 The KACITA chairman said there were many potential local investors who needed government advice on where to invest their money.

April 10 – The government has been asked to publicize priority areas which can appeal to potential local investors if Uganda is to gain comparative advantage in regional markets.

“We appeal to the government to help good entrepreneurs by giving them an insight on how to invest their money in productive ventures which can help grow the economy. Because such information is not available, most potential investors have all resorted to investing in the real estate sector,” Everest Kayondo the Kampala City Traders Association (KACITA) Chairman said.

He told 256BN although investments in the real estate were not entirely bad, but an over concentration of money into property represents a withdrawal. He said this reflects  a vote of no confidence in the economy because it shifts money from the trading sector to non-tradeables.

He said, “Because when you go in regional cooperation, you should not expect us to take housing estates as our goods. You are supposed to produce goods and services which you can sell in exchange for other foreign exchange earners. But if all the big business men are investing heavily in the real estate sector, this becomes a very big problem to the economy since the economy is not producing, but investing in non-tradeables and that is why we are finding ourselves stuck.

He said due to poor business decisions, most of the money the country earns in foreign exchange is actually from the diaspora. Latest figures show that remittances for 2016 increased by 16% to UGX4.3 trillion (just over a billion US dollars) compared to UGX3.6trillion ($995 million) that was recorded in the year 2015.

Kayondo said the country is supposed to be doing well in merchandise trade, “….but that is where  we are doing poorly, because the would-be investors are misdirecting their investment and government has not done enough to educate people in pointing them towards the right investments,” he said.