February 15—Ask many business people in Kampala whether they want lower interest rates or getting promptly paid for services rendered to the government, the answer is they want both. 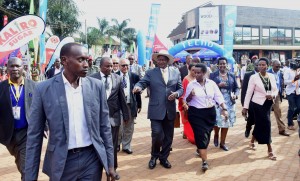 President Museveni at the 2017 Uganda Manufacturers Association showground, though an often passionate supporter of local industry, his government is crippling firms when it is slow to pay for services.

Early in the week, Bank of Uganda (BoU) knocked off half a percentage point from the Central Bank Rate (CBR) to drop it to 9% from the previous 9.5% with the repeated aim of encouraging financial institutions to lend to businesses, especially the small and medium enterprises (SMEs).

PwC, the financial consultants, said in their 2017 economic outlook report, Uganda’ economy is heavily dependent on small retail businesses, and these businesses become very constrained when the lending rates are high, as this limits access to credit and thereby undermining their ability to expand.

In the latest Monetary Policy Statement,  BoU Governor Prof. Emmanuel Tumusiime Mutebile said, “The growth of private sector credit remains below historic levels and the cost of credit remains relatively high for micro and small loans while the cost to corporates have declined.”

In just over a year, the CBR has fallen three points from December 2016 when it stood at 12%. Under normal circumstances business people would be pleased by this trend following the tough economic conditions of 2016 when GDP growth slowed below 5% for the first time in a decade, but they remain uneasy about new borrowing.

During financial year 2015/16, private sector credit grew by 16.2%, but in the first eleven months of FY 2016/17, private sector credit grew by only 4.2%. Giving Stanbic Bank’s first half results for 2017, Chief Executive, Patrick Mweheire said unutilized credit limits in the industry sector exceeded UGX1.7 trillion in June having moved from an average UGX1.2 trillion in 2015.

Recently, a senior manager with one of Uganda’s top five commercial banks told 256BN, “The government is the biggest single customer in our economy, but it doesn’t pay its bills on time which fouls up the cash flow of many medium businesses who supply it. It is not that people do not want to borrow money from us. The worry is borrowing then finding yourself on the government’s arrears list.”

On the other hand, Musa Mayanja Lwanga at the Economic Policy Research Centre says another factor that possibly contributed to the slow growth of credit to the private sector was the increase in domestic borrowing by the government from UGX2,258.6 billion in December 2016 to UGX3,089.4 billion in November 2017.

By this time last year, the Auditor General reported that the government owed local companies nearly UGX2.2 trillion.  A couple of months later during the annual manufacturers show, Matia Kasaija, the finance minister conceded,  “Arrears are not only hurting suppliers but also preventing cash from moving around; in the end this cripples production and purchasing power,” he said.

Kasaija’s junior, David Bahati, a state minister in finance said UGX110 billion had earmarked to cater for domestic arrears in the 2017/2018 financial year. “If the government paid on time, many of us would not have to borrow from banks. It’s a vicious circle. I don’t want my business to collapse, so I use the government IOU and other assets as security with the bank who then lend me money. But then the government pays me in piecemeal. We never get out of this circle,” a supplier of consumables told 256BN.

During July 2017, an IMF team suggested stronger efforts to improve arrears monitoring and adoption of a comprehensive arrears clearance and prevention strategy. But this is something that has been said several times over in recent years and to complicate matters is the concern that many of these debts are ‘air supplies’.

Mutebile said in the MPC statement, “Over the next five years, economic growth is projected to average 6.3 percent, boosted by public investments, increasing growth in consumption, and improved agricultural productivity.”

However, a couple of years ago, Francis Kamulegeya the Country Senior Partner of PwC Uganda said, “In order to make this growth a reality, it is important that Government clears all the arrears it owes to domestic enterprises. As at the end of June 2016, government had accumulated domestic arrears that were equivalent to 3.2% of GDP. This is severely constraining businesses and denying the economy this badly needed liquidity and purchasing power.”