February 15—At 9% the Central Bank Rate is at its lowest since the Bank of Uganda(BoU) adapted this model of regulating the industry in 2012, however if you are a ‘good borrower’ chances are it doesn’t make too much of a difference  because your bank is already giving you a very good rate. 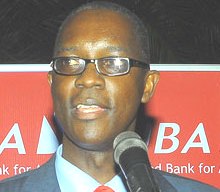 Owor said banks have considerable liquidity and some corporate customers are getting rates of between 14% and 18%.

The objective of lowering the CBR is to stimulate credit. It is meant to send a signal to commercial banks to bring down their lending rates so that more people can borrow.

BoU Governor Emmanuel Tumusiime Mutebile has however previously been on record saying the central bank cannot guarantee nor dictate that commercial banks lower their rates on account of a low CBR.

According to Wilbrod Owor, the Executive Director of the Uganda Bankers Association, the banks will lower lending rates to an extent, most likely by another 0.5%.

Stanbic Bank, the largest in the country by assets, is currently has its Prime Lending Rate (PLR) at 17.5%, but this is expected to drop to 17% by next week since Stanbic closely tracks the CBR.

The average industry rate stands at about 21%. However, Owor said there are ‘good borrowers’ who are enjoying cheaper rates of between 14% and 18%.

“Banks have a lot of liquidity, but businesses were reluctant to borrow last year, mostly those that were already servicing loans. I would like to make it clear that borrowers, especially the corporate segment, are accessing loans at below the average industry rate,” he told 265BN.

The banking industry considers corporate customers low risk owing to the frequency in which they borrow and pay back.

Small and Medium Enterprises (SMEs) on the other hand are considered high risk for higher chances of defaulting on payments. This means the rates at which they borrow are higher, with industry observers estimating at up to 26%.

Owor said, “What we are doing is identifying sectors which we can easily assist to expand credit. When people do not borrow, the economy does not grow. For customers who are considered high risk, we are working on re-examining their profiling. We are also building security frameworks that will ensure they become good borrowers, lowering the risk of defaulting.”

In his Monetary Policy Statement, Mutebile said, “The pace of economic activity strengthened in 2017 and we project economic growth to be in the range of 5% and 6% compared to 2.5% in 2016. In addition, there are indications of a revival in private investment activity; as reflected by the recovery of Foreign Direct Investment, which grew by 18.5% compared to a decline of 30.5% in 2016.”

He said, Additionally, shilling credit extension improved by 10.8% compared to 7.9% in December 2016 and imports of raw materials and capital goods, grew by 17.4% compared to a decline of 21.1% in the period under review. These developments, coupled with an improving global economic outlook, could strengthen domestic economic activity. Economic growth for Financial Year 2017/18 is now projected in the range of 5% and 5.5%, a positive payoff for the current stimulatory monetary policy.”

Furthermore, BoU projects an average growth of 6.3% over the next five years boosted by public investments, increasing growth in consumption, and improved agricultural productivity.

“There are nonetheless downside risks to this outlook. The growth of private sector credit remains below historic levels and the cost of credit remains relatively high for micro and small loans while the cost to corporates have declined,” he said.

Noteworthy, is Non-Performing Loans (NPLs) as a percentage of gross loans have declined from a peak of 10.5% in December 2016 to 5.6% in December 2017, which should support credit extension. In addition, although public investment programmes could substantially raise output and be self-financing in the long run, transitional challenges of funding these investments can be formidable and may crowd out private sector borrowing, thus delaying the growth benefits of public investment.