May 02, 2018 – The relaunch of defunct national carrier Uganda Airlines appears to be getting […] 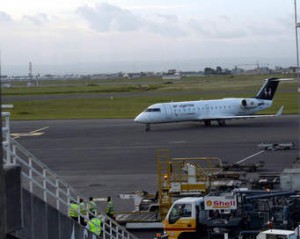 May 02, 2018 – The relaunch of defunct national carrier Uganda Airlines appears to be getting off on a shaky footing as a November launch becomes more certain.

256BN has learned that $12 million has so far been paid to Canadian airframer Bombardier as a deposit on four CRJ-900 series aircraft while retired aviator and former legislator Captain Gad Gasatura has been selected as the MD designate for the carrier.

According to sources that spoke to this news site off record, the Uganda Airlines team has already taken over the space formerly occupied Middle Eastern carrier Etihad Airways at Entebbe International Airport as preparations gather pace.

“They are now at the stage of securing an Air Operators certificate from the CAA,” our source says.

Although more details are yet to become available, it is understood that the project team on which Gasatura seats together with Engineer Ephraim Bagenda, a Technical Director at Rwanda Air until late 2017 and former Air Uganda chief executive Mr. Cornwell Muleya is walking in the footsteps of the AKFED owned airline that abruptly folded in July 2014.

The team is set on seeing the carrier take to the air in November 2018, and operate a regional point to point network of between 18 and 20 routes before launching medium to longhaul operations in 2020. London and Guangzhou are the two routes under consideration. The team has selected the Airbus A330 Neo – 800 series for the long haul fleet.

We have not been able to get details of the planned destinations under the regional network but people familiar with the plans are already faulting the long interval between launch and long haul operations as too long a pause. They argue that a fleet of four aircraft means you are either going to be flying to many points, which could generate substantial traffic that will demand onward carriage or failing which could leave the airline stranded with expensive over-capacity.

It was not possible to reach Captain Gasatura for comment but he holds an MSc degree in air transport management from City University, London. He is a retired commercial pilot, aircraft engineer and currently a management consultant specialising in organisation development.