June 13, 2018—The National Water and Sewerage Corporation (NWSC) has signed a contract with French engineering […] 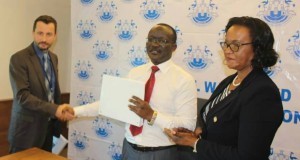 Andriamaybuongy and Eng. Mugisha exchange documents for $96 million project that will eventually add 160 million litres of drinking water by 2021.

June 13, 2018—The National Water and Sewerage Corporation (NWSC) has signed a contract with French engineering firm, Sogea Satom, for construction of a new drinking water treatment plant in Katosi, east of Kampala.

Works are to be done in phases, but expected to be completed by March 2021. Total cost is put at UGX 370 billion (euro 82,213, 231; $96 million), with the government contributing between 20 pc and 30 pc of the money. The rest of the funding will come by way of a loan from the European Investment Bank and bilateral arrangements with the German and French governments together with financial assistance from the EU Africa Infrastructure Trust Fund.

Sogea Satom project manager, Tejy Andriamaybuongy said the company has been working on several projects in Uganda and had the required capacity to deliver the project on time. “We are glad to have secured this project and we can promise that we will do this project with the utmost quality and deliver with in time” he said.

The new plant is expected to produce over 160 million litres of water per day and boost supplies  to outlying areas of Greater Kampala including Wakiso and Mukono. The additional 160 million litres in addition to the current 240 mllion litres produced by the Gaba plants will put total drinking water volumes for Kampala at 400m litre.

NWSC executive director, the Eng. Silver Mugisha, said once the project is finished, it will solve water shortage problem for the next 15 years that has been rampant with in the districts of greater Kampala. “Because of the ever increasing population within the Greater Kampala, there has been shortages of water in some parts despite NWSC’s efforts to provide reliable water. However once this plant is completed, water shortage within Kampala will no longer be an issue.”