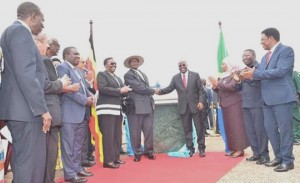 Museveni and Magufuli shake on it after unveiling the foundation stone over the weekend.

August 7—President John Magufuli and President Yoweri Museveni reconfirmed their commitment to the proposed East African Crude Oil Pipeline (EACOP) by laying a foundation stone at the Tanzanian port of Tanga over the weekend.

The 1,445 kilometre pipeline will  carry crude from Hoima in western Uganda and terminate at Tanga. Museveni said the beginning of the construction was another milestone towards achieving Uganda’s Vision 2040. He said the construction phase will provide 15,000 direct jobs and several thousands more in indirect employment.

He thanked the Tanzanian government for the concessions being offered. “There will be no paying of transit tax, or Value Added Tax, no corporate income tax. They gave us 20 years depreciation tax holiday, granted us a free corridor where the pipeline passes and promised to buy shares in the pipeline,” he said.

The heated pipeline, projected to be longest of its kind in the world, will cost $3.5 billion and is expected to be completed by 2020. Backers include, Total E&P, CNOOC and Tullow Oil together with the two governments of Tanzania and Uganda. Uganda’s crude is waxy and hence the need of a heated pipeline.

In turn, Magufuli thanked Museveni and his government for trusting Tanzania and choosing the Tanga route for the project despite other options being available. “This pipeline could have gone to a shorter route of 900 kilometres, but Uganda chose us. We had to make concessions for our Ugandan brothers like we have previously done to liberate them,” he said. Tanzania armed forces played a major role in the ouster of Idi Amin in the Liberation War of 1978/79.

“We had to sacrifice, but we shall also benefit. During construction, direct jobs will be between 10,000 to 15,000 while temporary ones will peak to 30,000. Already hotels are benefiting as guests come here and we shall set up a cement factory here, one of the biggest in East Africa,” Magufuli said.

Museveni suggested regional states look at the EACOP as an East African Community asset. He said with the many discoveries of oil and gas deposits in the region, the pipeline facility could become useful for other countries .

“Our East African Community imports $33 billion per annum worth of goods and services while our exports are $13.8 billion, making us donate resources, jobs, taxes and income to the developed world to enhance their technology. Export-led growth is very important and India and China can bear testimony and we need to focus on it,” Museveni said.

The two leaders also used the occasion to underscore the need for the rapid integration of the East Africa economies to ease the joint planning, financing and implementation of major projects that are crucial for the development and transformation of the region.

Magufuli said with the oil coming to Tanga, Tanzania would now buy crude oil from Uganda instead of incurring high exports of importing from the Middle East and Persian Gulf, while indicating that Uganda would also find it cost-effective selling to Tanzania.