March 6–Jehoash Mayanja Nkangi  who was the finance minister between February 1992 and May 1998, has […] 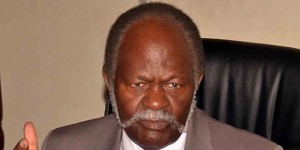 Nkangi presided over the initial stages of the government’s privatisation programme in the early 1990s.

March 6–Jehoash Mayanja Nkangi  who was the finance minister between February 1992 and May 1998, has died at 85 after being briefly hospitalised in Kampala.

He presided over the finance ministry at a time when the government’s privatisation programme of state-owned companies took off in the early 1990s. The programme gained momentum by 1997, sometimes in the most controversial manner, due to the fierce in-fighting and competition for the spoils including hotels, manufacturing entities and financial institutions.

The World Bank and International Monetary Fund made it clear to the Uganda government that further financial support from these multilateral institutions would depend how much savings could be made in eliminating subsidies and selling off these entities.

Nkangi graduated from Makerere College in 1953 with a BA in Economics. Mathematics and History In 1954 he got a government scholarship to Britain’s Oxford University to study for an MA in Philosophy, Politics and Economics, specializing in the latter. At the successful completion of his course, he entered Lincoln’s Inn and was called to the Bar in 1959. When he returned to Uganda he practiced as a barrister.

His political activity dates back to 1953. In 1960 he led the United Party. When the United Party decided to merge with Uganda National Congress, he abandoned it to form and subsequently chair the United National Party. He then joined Kabaka Yekka and was elected KY MP for Masaka in May 1962.

In 1962, Nkangi witnessed the lowering of the British Flag and hoisting of the Uganda Flag on Independence Day in 1962. He served as Member of Parliament for Masaka East, and later Minister without Portfolio in 1962. He was also Minister of Commerce and Industry.

In 1964, at the age of 33, Mayanja Nkangi was appointed Katikkiro of Buganda, a position he held through the tumultuous years of Uganda-Buganda bickering until 1966 when the Kabaka was exiled. The following year, kingdoms were abolished and a new constitution put in place.

Just like the Kabaka, Nkangi also went into exile in London following where he secured a job as a research fellow at Lancaster University.

Obote would be overthrown in 1971 by Idi Amin, the man the former had used to attack Mengo Palace and exile the Kabaka. Mutesa had died and been buried in exile in the United Kingdom in November 1969. Amin agreed to return Mutesa’s body and give it a state burial.

In 1980, after the overthrow of Amin, Nkangi formed the Conservative Party. Despite working for over 16 years under the Museveni’s regime, Nkangi insists he is still a conservative.

Nkangi was Minister in the Museveni government from 1986 until his retirement in 2001, holding such sensitive portfolios Education, Finance, and Justice. On retiring, he was appointed Chairman Uganda Land Commission.