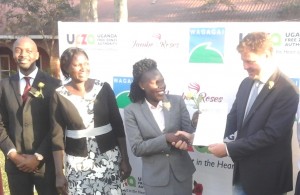 Anite hands over the license to Boenders as Jabo (extreme left) looks on during the official ceremony that designated Wagagai a free zone.

August 10— Wagagai  Limited,  Jambo  Roses Limited  and Ugarose Flowers Limited have been issued with Developers Licenses by the Uganda Free Zones Authority (UFZA). This is expected to reduce their production costs and make their products more competitive on the international market.

The companies are involved in the cut-flower business with the main market being the European Union.

According to the Uganda Flowers Exporters Association, the country is currently flying out just over 6500 tonnes annually with total sales at about $30 million.

During an official ceremony to hand over the licenses, Evelyn Anite, the junior minister in charge of investment and privatization said, “Flowers is one of the sectors which has the potential to create a thousand jobs for the ordinary Ugandan. As the government, we are committed to supporting  investors in the flower sector, because Uganda has got a favourable environment for foreign direct investment (FDI).”

UFZA is the regulator and promoter of economic zones, which the government wants to see cropping up, that will specifically cater for a variety of industry and manufacturing. The other strategy is to designate particular enterprises into zones.

Olav Boenders the Managing Director of Wagagai Limited thanked the government for granting them a license to operate as Free Zones which he said it will lower their overhead costs, especially when it comes to paying customs duties. A big chunk of the chemical inputs used by the flower companies are imported.

“Operating in a free zone, this will reduce the pressure which we have been exerted on by Uganda Revenue Authority whenever the company imports inputs to be used in the greenhouses. We have been taxed highly, but now under this arrangement the company will be relieved from the tax man,” he said.

Some of the other companies already granted free zone status, have set up health facilities and schools  as part of their Corporate  Social  Responsibility.

Anite said FDI on an annual basis has reached about $916 million mostly in manufacturing, services, and industry. She said other sectors, such as the flowers, can do better. Kenya is the region’s top exporter, but Ethiopia is considered the most competitive with the government there bending backwards to attract flower grower with generous tax incentives.

The Minister assured the investors the cost of doing business in the flower sector  will soon come down when the two power dams start generating electricity beginning next year.

“As Government we know the challenges investors in the flower sector are struggling with. One of the bottlenecks is the cost of power, but  this will be mitigated when we switch on the two power dams. This may result in lowering the cost of power especially to investors,” she said.

Within the next three years, the government expects the 600 MW Karuma Dam and 180 MW Isimba Dam to go online.

Boenders said their focus now will be on expanding their business by constructing more greenhouses provided they secure the land and continue to improve the working conditions for their employees with better salaries.