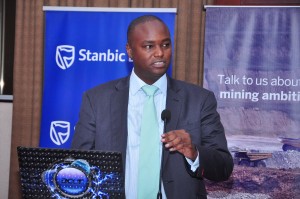 Mweheire is optimistic about developments in Uganda’s oil and gas sector as the future locomotive for faster economic growth.

June 14, 2018— Fitch Ratings, one of the world’s top three credit checkers has given Stanbic Bank Uganda a National Long term rating of AAA with a stable outlook and a long term Issuer Default Rating (IDR) of B+ with a stable outlook. IDRs reflect vulnerability to default on financial obligations.

Stanbic Bank, which is listed on the stock exchange, is the first company in Uganda to be rated by an international credit rating firm and the ratings consolidates its position as a solid investment.

Patrick Mweheire the bank’s Chief Executive said, “The rating is a definite validation of the bank’s strength by one of the top international credit rating firms. It should further entrench our stakeholders trust in the bank and the renewed sense of optimism within the international business community of Uganda as an investment destination.”

The bank’s financial results for 2017 show a UGX200 billion (just over $52 million) net profit while its asset base grew by 18 pc to UGX5.4 trillion ($1.4 billion). Stanbic Uganda is part of the South African-based Standard Group which as of December 31st  2017, reported assets of $165 billion and a market capitalization of $28 billion making it the largest African bank by assets.

Referring to the business outlook in Uganda Mweheire said, “All indicators point to a slow, but steady economic recovery, with our recent PMI index reading reaffirming this having risen from 51.8 in April to 53.4 in May representing the 16th straight month of growth.”

A credit rating measures the creditworthiness of a company. For Fitch, AAA is the highest rating indicating the lowest expectation of default risk.

The stable rating is based on the bank’s solid financial metrics and limited probability of needing support from its South Africa-based parent company which owns 80 pc of Stanbic Uganda. According to the Fitch report, SBU has delivered consistently strong earnings and profitability, underpinned by solid interest and non-interest income generation. Low loan impairment charges and good cost control also underpin performance.

Mweheire said, “While the current pace of recovery is relatively slow, economic activity is expected to pick up in the last quarter. A lot however hinges on the projected closure of some of the major FEED oil and gas contracts and the Final Investment Decision which will be taken thereafter. We are optimistic this will be happening within the first quarter of 2019 given the recent signing of the framework contract for the oil refinery which is one of the major oil and gas project components.”

Fitch’s credit ratings do not directly address any risk other than credit risk. In particular, ratings do not deal with the risk of a market value loss on a rated security due to changes in interest rates, liquidity and other market considerations. However, in terms of payment obligation on the rated liability, market risk may be considered to the extent that it influences the ability of an issuer to pay upon a commitment.