July 18, 2018—Keith Muhakanizi, the Secretary to the Treasury/Permanent Secretary in the finance ministry and a […] 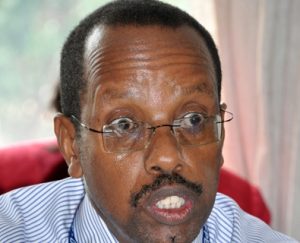 As the point man at the finance ministry, the blunt senior technocrat told participants at the bankers’ talks that supplementary requests must end.

July 18, 2018—Keith Muhakanizi, the Secretary to the Treasury/Permanent Secretary in the finance ministry and a man who likes to tell it straight, has despaired over the government’s persistent lack of financial discipline.

He was referring to supplementary budget requests from various government Ministries, Departments and Agencies (MDAs) that continue to cause frustration in the finance ministry often submitted less than a third of the way into a new financial year.

Muhakanizi’s concerns come as the finance ministry has been asked to look for several million dollars to pay for armoured vehicles as protection for Uganda’s 400-plus legislators in the national parliament. This is an item not included in the 2018/19 budget.

Speaking during a panel discussion at the Annual Bankers Conference organised by the Uganda Bankers Association on Tuesday, Muhakanizi said, “Cabinet should ensure we minimize on supplementary expenditure, because (this practice) has a negative impact on the planning and budgeting process; cutting money from weaker sectors to facilitate supplementary (budget requests) as opposed to stronger sectors, causes problems, especially because ( these proposals) to ‘touch’ stronger sectors can also bring ‘problems.’ ”

This year’s conference theme was ‘Financial Sector Stability; Managing Risk in a Growing and Fast Changing Environment’. The bespectacled permanent secretary, known for his blunt style of, ‘no money,’ whenever requests from accounting officers come his way, pointed out some major weaknesses that adversely affect financial management in government.

Others on the panel included John Mafungei, the Chief Executive Officer, Deposit Protection Corporation Zimbabwe (who was also one of the keynote speakers); Dr. Tumubweine Twinemanzi, the Executive Director of Bank Supervision in Bank Of Uganda; Mathias Katamba, the Managing Director of Housing Finance Bank; Ruth Sebatindira, Senior Counsel and Partner at Ligomarc Advocates, and Dr. Fred Muhumuza, a Development Economist at Makerere Universityin Kampala.

The session was moderated by PwC Partner Uthman Mayanja, but the characteristically combatative senior technocrat also took the opportunity to publicly differ with his line Minister, Matia Kasaija on certain points. Payment of arrears remains a contentious point between the government and supplying companies, including their bankers, but the situation shows no signs of improving anytime soon.

Earlier in the morning, Kasaija highlighted Uganda’s positive economic prospects in the near future, but Muhakanizi with reference to the arrears problem said,  “(Kasaija) is not sure of what he was talking about, and needed to be assisted.” He said the government has to come out with an effective payments system if arrears are to be limited and eventually done away with.

Accompanied by loud applause, Muhakanizi criticised political interference in economic policy matters said, “Government must allow regulators do their work….interference with the Central Bank must not be allowed.” Towards the end of 2016, Bank of Uganda seized and later sold off the assets of Crane Bank which had ran into financial difficulties.

However, on taxation policies and in particular the controversy of the original one percent tax on mobile money transaction (to be reduced to 0.5 percent), the PS reminded Ugandans they hardly paid any and the issue needed to be tackled headlong. At 14 pc, Uganda has the lowest tax-to-GDP ratio of the three bigger East African Community member states. He conceded that the whole mobile money tax issue hand been handled badly, but stressed Uganda’s tax base must be strengthened and rapidly if economic stability is to be maintained.