April 5–Today, Parliament will discuss in detail and approve Uganda’s Budget for the financial year 2017/18. […] 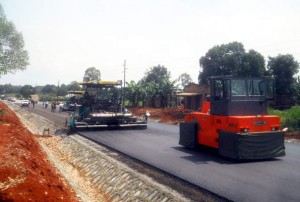 Road construction will continue to swallow up a large chunk of money in the  2017/18 National Budget due to be read in mid-June.

April 5–Today, Parliament will discuss in detail and approve Uganda’s Budget for the financial year 2017/18. David Bahati, a state minister for finance earlier this week presented to the House a spending proposal of UGX28.9 trillion (close to $8 billion) asking that legislators consider and adopt it.

“Honourable Speaker I beg to lay to the House the final budget framework paper/estimates for the financial year 2017/18 for your consideration and ask that you pass it,” Bahati said.

Bahati said the budget has been worked out to purposely raise tax revenues, keep the consumer price index at 5%, reduce interest rates, maintain a competitive exchange rate, and to promote industrialization.

“The budget strategy for next financial year is aimed to increase agricultural production and food security, enhance the performance of the private sector, especially to lead to the production of oil by 2020, intensify the fight against corruption as well as boost domestic revenues,” Bahati said.

The final budget estimate of UGX28.9 trillion for the next financial year shows that the Ministry of Finance, Planning and Economic Development has revised figures lower from the earlier estimates of UGX30.2 trillion.

Government priority in the recent past has been new infrastructure with a large proportion of the budget dedicated to roads and power, but added to this is the proposed Standard Gauge Railway. However, many legislators worry out aloud that not enough money has been injected in social-welfare sectors that touch the ordinary person across the country.

“We want more money allocated into the pensions fund, agriculture and other sectors. When you look at the money allocated to such critical areas it’s quite miserable, yet such areas and or sectors are the ones that benefit the ordinary person directly,” Odong Felix Okot, the MP for Dokolo South said.

However, the Chairperson of Parliament’s Committee on National Economy, Syda Bbumba said although the money might not be enough, if it is used appropriately, it will still deliver on governments’ targets.

“I have not yet looked at the details of the budget, but members of parliament will discuss it in detail today. What I know, different government sectors, agencies and departments have been working with different parliamentary committees and we believe they did a good job to reconcile the most important aspects of the budget,” Bbumba said.