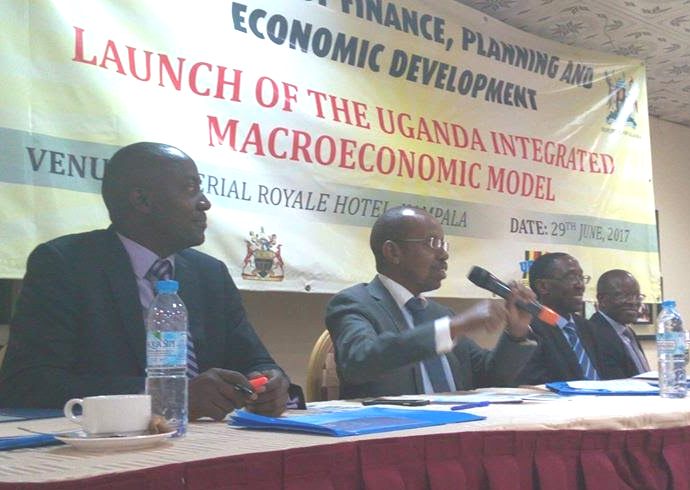 Muhakanizi (second left), said the Ministry needed a more sophisticated system to complement the structural changes of the economy, notably the emergence of the oil and gas sector as major influential factor.

June 30–The finance ministry has launched a system that relies on data-based analysis to make it easier to assess the impact of proposed policy changes on the different sectors of economy.

The Integrated Macro Economic Model (IMEM) is software that is designed to make forecasts on macro-economic growth and track how these changes affect sectors, poverty rates as well as the household incomes.

Based on the data generated, policy makers in government as well as other financial institutions will then be able to make informed economic policy decisions.

Technocrats in the Ministry of Finance and Economic Development say Uganda’s economy has evolved overtime and become more sophisticated. This now requires additional analytical tools for such new aspects like the developing oil and gas sector.

They believe that unlike the existing models, the IMEM software which took six years to complete will ensure that key legislations and national plans are implemented on time.

Dr. Albert Musisi, who is the Commissioner for Macroeconomic Policy, said the model uses a top to bottom approach through three components namely; the macroeconomic, computable general equilibrium and the micro economic analyses.

The findings at each of the three levels will be used to assess the possible impact of the variables in the lower level and determine which policy to adopt.

Keith Muhakanizi , the Permanent Secretary and Secretary to the Treasury, said the model comes at a time when the economy requires the right policy mix to steer GDP growth to 6% if Uganda is to attain middle-income status by 2020.

He said, “This is a highly integrated model unlike the older one which only dealt with the macro aspect. It gives you a scenario of what is likely to happen. The model for example says most tax exemptions don’t necessarily translate into poverty reduction, but rather enhance inequality.”

This something the International Monetary Fund and several civil society organizations have been saying for years, but the government has remained insistent on offering them.

Muhakanizi said, “Therefore, if I was to advise from that angle I would say exemptions are not the best way to deal with poverty.”

Meanwhile, an Economic Modeling Unit, comprised of technocrats from external institutions like Bank of Uganda, Uganda Bureau of Statistics, National Planning Authority, Uganda Revenue Authority and the Parliamentary Budget Office, has been set up at the Ministry to ensure effective utilization of the IMEM tool.

Participants at the launch however asked that the data generated by Ministry of Finance be availed to the public especially the academia while others said the tool should be used to address the existing inequalities in income.