April 9, 2018—The Djibouti government faces the prospect of taking back the strategic $590 million Doraleh […]

April 9, 2018—The Djibouti government faces the prospect of taking back the strategic $590 million Doraleh Container Terminal from a Chinese consortium, after the previous operators, DP World Limited,  got an international arbitration decision stipulating a breach of contract has been committed. 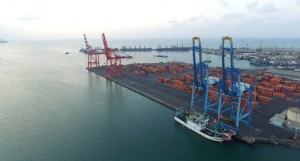 The Chinese put up half of the money used to build the $590 million port, but DP World is not happy how they were brushed aside even though they had an agreement with the government.

It adds that, ‘That Agreement conferred on DCT the right to operate the port, which it designed and built, and in turn DP World was mandated to manage the port. The Agreement also gave DCT and DP World exclusive rights to build and operate any other container ports and free zones in Djibouti’.

Earlier this year, authorities in Djibouti reneged on that deal with DP World by handing the facility over to a Chinese-backed consortium much to the alarm of the United States government which has its largest military base on the continent within the vicinity. Some 30% of all shipping around the world passes through the Suez Canal and Djibouti.

On the other hand, Djibouti said the move to cancel the agreement was as a direct result of disagreements with DP World over allegations of business malpractices done by the multinational port operator and which they have consistently denied since 2012.

According to a recent statement by Djibouti’s permanent mission to the United Nations in New York,  Societe de Gestion du Terminal a Conteneurs de Doraleh, a state-owned company created to take over the operations of DCT, signed an agreement on March 5 with Singapore-based Pacific International Lines, to boost cargo traffic. The deal came a fortnight after a presidential decree terminated DP World’s management of the port.

China partly paid for the construction of the terminal, through China Merchant Holding (CMHC). The facility fits in nicely with Beijing’s ambitious plans to secure future logistics lines for both imports and exports. Most of the money used to build the $4.5 billion Addis Ababa-Djibouti railway was also borrowed from China.

Last December, the Sri Lankan government announced a decision to hand over its $1.3 billion Hambontota port  to Chinese interests in a 99-year lease arrangement, because it could not pay back the Chinese loans.  Chinese firms now control 70% of the port. The Chinese are also involved in the estimated $10 billion expansion of Bagamoyo port in Tanzania, in a joint venture with investors from Oman while the Tanzanian government will provide the land after failing to raise its prescribed cash equity.

DP World says their deal with Djibuoti was recently upheld as a valid and binding contract under English law by a distinguished tribunal of arbitrators (one a former member of the United Kingdom Supreme Court, another a member of the English Court of Appeal, and the third a leading Queens Counsel and independent arbitrator) under the auspices of the London Court of International Arbitration or LCIA, which rejected Djibouti’s attempt to rescind the agreement based on false allegations of corruption.

DP World, which runs 70 various port facilities across the globe said, ‘it will pursue all available legal recourse, including claims for damages, against any other entities that tortiously (one who infringes on the rights of others) interfere or otherwise violate their rights with respect to the Concession Agreement’.