Farmers queried on their cooperative spirit 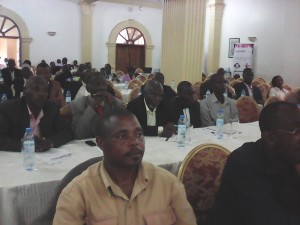 Cooperative members during the workshop when they heard being described as weak and financially strapped because of not taking their clout seriously.

September 22—Farmers in Uganda have been queried on their lack of urgency in reviving the cooperative movement and consolidating their clout in the national economy.

Before the mid-1970s, cooperatives were the pillars of Uganda’s agriculture which is still today the mainstay of the economy contributing about 30% of the country’s GDP, but beset by under-funding.

“When we look at cooperatives that are in Uganda at the moment, you realize that they are too weak to make any demand. Most of them are just there in names, but there is no real activity taking place on the ground,” Professor Michael Kansiime, the Program Director at the Africa Institute for Strategic Services and Development (AFRISA) based at Makerere University said.

This was during a recent workshop organized by the Uganda Cooperative Alliance (UCA), as part of their AGM early this week. UCA Limited which was set up in 1961, is an umbrella organisation for all cooperatives in Uganda. It sees itself as the voice of the cooperative movement both nationally and internationally.

UCA also serves as the main cooperative policy advisor for the government, implements various cooperative development projects, and is mandated by law to arbitrate and help settle conflicts within the cooperative movement. According to the trade and industry ministry, there are nearly 17,000 registered cooperative societies of various interests in Uganda.

The Professor, who presented a paper on ‘Investing in cooperatives education research and development to realize better performance’ highlighted ways on how commercial success for cooperatives can be achieved. “Farmers must make stronger cooperatives that can make intentional demands as well as provide them with international markets and information.”

He said although cooperatives were formally initiated to  give farmers more bargaining powers and fight for their rights, this is not happening, because most cooperatives are financially incapable of making any strong decisions or demand on behalf of the farmers.

“These cooperatives look at today and do not care about the future. This must change if Uganda is to attain middle income status especially for its farmers. In other countries like Korea, Italy and even Kenya, cooperatives have been able to make real change in the lives of farmers and are the biggest source of job opportunities and market research.”

“This can be achieved through partnerships with bigger companies, enterprise innovation, value chain education, training and research as well as understanding the science innovation and technology used in agriculture,” he said.

Prof. Kansime said, “The agriculture sector in Uganda will only be modernized if we reinforce cooperatives and capitalize them to be able to do research and innovations so that the farmers can produce goods that are on the international market.”

He asked farmers in Uganda to look beyond their political differences and beliefs and work together towards the common good of eliminating poverty and benefiting from their produce.

Peter Kimbowa, the UCA Chairman said the organization was doing considerable work to make sure the cooperatives have access to cheap capital and also help them to position themselves for businesses.

The CEO UCA Ivan Asiimwe said the body was planning to demand that governments start giving at least 30% of government contracts as a way of showing commitment to the local farmers.

“It is unfair that government would award a contract to a single person who then goes to the farmers and buys at the cheapest price possible and in turn sells to government at a higher price taking all the profits to himself. We want this to change; we want government to make a commitment to give at least 30% of all the contacts to cooperatives so that a big number of people can gain from the good prices that government pays,” Asiimwe said