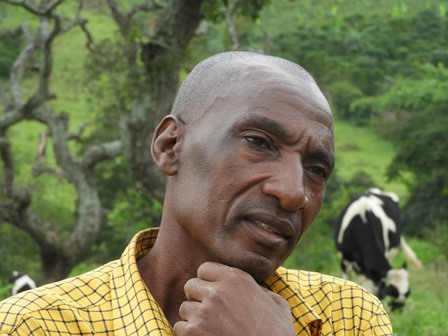 Falling farmgate prices for milk and rising input costs, are forcing farmers in southwestern Uganda to […]

Falling farmgate prices for milk and rising input costs, are forcing farmers in southwestern Uganda to abandon raising cattle for milk production, putting the future of the sector into jeopardy.

Frustrated farmers are instead moving into raising indigenous breeds which they fatten for beef because they find more profitable because of better prices. Indigenous breeds also have better resistance to disease which translates into lower costs, says Eldad Turyazyo, a farmer in Nyakatoke village in Rubindi sector.

Turyazayo who sells his milk to Bwengule Collection Centre, a farmers’ cooperative, says often, he has to sell off some of his dairy cattle to buy inputs because low prices mean that the proceeds from milk sales are not sufficient to meet his family needs, the cost of labour, veterinary drugs and pesticides.

“Am better off going back to local breeds for beef production because they cost less to maintain.

The cost of acaricides has gone up and yet you have to use more quantities because they are less reliable.

“If I fatten a bull for three months, I can sell it for a handsome profit which I cannot achieve from selling milk,” Turyazayo says adding that were it not for the closure of schools because of the Covid-19 Pandemic, he would have had to sell off more livestock from his herd of 50 Friesians to meet tuition and subsistence costs for his two university-going students.

Ponsiano Tugumya who manages 72 purebred Friesians on the family’s 118-acre farm in Rwenzuba parish in Rubindi-Kashari, is considering venturing into another business after incurring UGX 9 million in losses over six months. During the rainy season, he can collect 140-160 litres of milk daily from the 17 lactating cows. But he barely makes ends meet because he has to spray against ticks every four days and deal with episodes of East-coast fever which can be expensive to treat.

Like Turyazayo, he has had to sell off some of his livestock to meet direct farm costs such as labour as well as family needs. He is now considering get rid of his dairy cows and replacing them with indigenous breeds for beef fattening.

“The veterinary drugs are very expensive yet they have a poor success rate. On the other hand, if I bought a local cow and fattened it for three months, I can sell it at a profit that I cannot realise from milk sales,” he says.

Farmgate prices for milk plunged to UGX200 per litre starting January after Ugandan processors were denied access to the Kenyan market. Domestic milk consumption also suffered a slump when many workers lost income as employers reduced their headcount in response to the impacts of a national Covid-19 lockdown.

Although farmgate prices have bounced back to an average of UGX600 per litre, farmers are still not happy and many are hedging against future losses by moving into beef production. Tugumya says a farmgate price in the region of UGX1500 per litre would be more acceptable.

Besides the obvious implications for consumers who will be exposed to higher prices if milk production falls, the shift away from dairy farming also leaves processors who have put heavy investment into capacity in a difficult place. They need a predictable supply of milk in order to be price competitive and recoup their investment.

Stephen Aikiriza, a Dairy Advisor with SNV Netherlands which is supporting dairy extension services in South Western Uganda blames the shifting attitudes on poor understanding of the dairy business by farmers and market distortions caused by middlemen.

Demand for raw milk sharply went up when Pearl Dairy, a processor with a capacity of 0.8 million litres per day set up shop in Mbarara. Combined with episodes of dry spells, farmgate prices shot up to UGX 1500 a litre in 2017, encouraging more production.

Aikiriza says national milk production reached 2.5 billion litres in 2019 with 70 percent of that output coming from southwestern Uganda. That level of production represents an increase of nearly 0.9 billion litres in the space of just two years. He believes the current price of UGX 600 per litre is more a reflection of the market equilibrium between demand and supply.

“We saw this happening as early as 2014 when Busyenyi which was best known for milk production fell off the radar only for Rushere and Kiruhura to come up. Farmers have failed to understand business cycles which has led to false expectations, a situation worsened by middlemen,” Aikiriza says.