August 30, 2018—Uganda’s SGR plans are likely to come under focus next week as African delegations […] 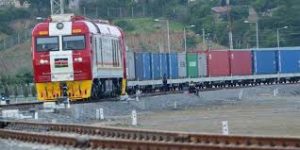 August 30, 2018—Uganda’s SGR plans are likely to come under focus next week as African delegations converge on Beijing for the Forum for China-Africa Cooperation FOCAC that runs from September 1.

While President Museveni will be leading Uganda’s delegation that includes officials from the Ministry of Works and the SGR project to Beijing, officials from the ministry would not confirm if the event would provide the backdrop for inking a financing agreement for the 273km Malaba-Kampala, SGR line.

Uganda’s minister for Transport and Works Monica Ntege Azuba, was non-commital telling 256BN to contact her office in Kampala because she was “travelling outside the country.”

Sources from the SGR project office confirmed a team from there would be joining the Uganda delegation to FOCAC, which also includes officials from the Ministries of works and finance.

Kenya, which will also be going to Beijing, has confirmed it will signing a $3.8 billion loan agreement for the Naivasha-Kisumu section of its SGR development. That will bring the line closer to the Malaba interconnection point where the Uganda and Kenyan sections of a seamless SGR network running from Mombasa to Kigali are supposed to meet.

Kenya’s Cabinet Secretary for Transport and Infrastructure Mr. James Macharia told Kenyan media that the funding agreement for that segment would be inked on the sidelines of the FOCAC that runs between September 1-5.

The SGR project looked up earlier this month when President Museveni discussed funding possibilities with his Chinese counterpart Xi Jinping, on the sidelines of the 10th BRICS Summit in South Africa.

Speaking after the meeting, Museveni said, the government and civil contractor,cChina Harbours Engineering Company (CHEC) would make a joint bid for  China Eximbank financing but did not provide timelines.

The Naivasha-Kisumu line is the second of three sections that constitute the second phase of Kenya’s SGR project that starts in Mombasa and terminates in Malaba along the Kenya-Uganda border.