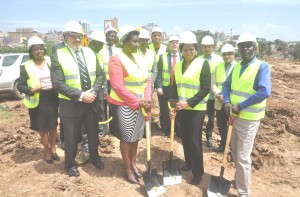 Kyambadde, Byrd and Odere line up at the ground-breaking ceremony that marked the beginning of construction for Arena Mall.

October 26—It took the developers of the proposed Arena Mall in Kampala four years to put get together the initial $20 million financing package and get the project underway.

“Some of the projects require a lot of resources and our local banks cannot afford to finance such mega-projects. That is why most developers are applying for finance from international institutions, but to secure such funds it’s not easy and that is why we need government support by guaranteeing us to access these funds in order to execute these real estate projects,” Charles Odere, the local sponsor of the joint venture with South African partners said at the ground-breaking ceremony this week.

Representing STANLIB, Nnema Byrd said investing in the project will not only provide more commercial space, but also create jobs for thousands of Ugandans, especially young people.  STANLIB, based in South Africa, is a leading  asset management company with plenty of high-profile clients.

Seyani Brothers are the lead contractor while Knight Frank (Uganda) will eventually manage the property on the outskirts of the city centre. Arena Mall is expected to be Kampala’s first environmentally sustainable building and will have a 4-Star rating by the Green Building Council of South Africa.

Odere said many projects across the country have failed to kick off, because developers can’t access affordable loans from financial institutions. He asked Amelia Kyambadde, the trade and industry minister who was guest of honour to take up the issue.

Kyambadde said developers should go into joint ventures as one way to manage  some of the challenges facing the commercial real estate sector.

“Yes there’s need for Government to support real estate’s developer in the country, because they facilitate trade through offering rental space, but Government is also facing the same problem of accessing finance to finance its programs. But if they form joint ventures developers can access cheap loans from the financial institutions without the government’s hand,” she said.

The Minister used the occasion to warn landlords, especially those in the Central Business District against overcharging businesses which she said has negative consequences especially on the small and Medium Enterprises .

“At the Ministry we receive over 100 complaints monthly  from the business community complaining about rental charges. Some developers are even charging in foreign currency this is an increase in the cost of doing business,” she said.