March 7—The European Union (EU) hopes the €15 million (about $18 million) it is giving Uganda’s agriculture ministry will help bring some order and a more commercial footing to the country’s beef industry. 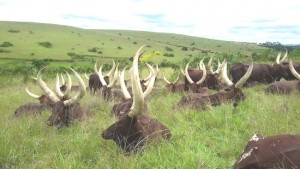 A herd of the long horned Ankole cattle found in western Uganda and one of the country’s main producers of beef, but more abattoirs are needed as consumer demand rises.

The project will be launched on March 20, 2018 at a venue which is yet to be decided by the Ministry of Agriculture. According to the Uganda Investment Authority (UIA), the meat sub sector is mostly very domestic and self-sufficient, with very limited exports.

There is a need to increase production through large scale commercial farming and ranching to take advantage of the increasing demand for Ugandan beef in the region.

Most of EU development funding to Uganda is financed by the European Development Fund, with the present cycle, 2014-2020,  totaling €578 million or nearly $720 million. After the World Bank Group, the EU is Uganda’s top multilateral donor and helped pay for 15 new valley dams last year.

Dr Noelina Nantima, the Assistant Commissioner, Animal Diseases Control at the agriculture ministry said the five year project will be implemented in 24 districts of the Cattle Corridor including  Bulisa, Masindi, Masaka, Mbarara and Kiboga.

Hosting a delegation from Masindi in mid-week she said, “In this project the public and private sector will work together towards promotion of an environmentally –sustainable climate –resilient, low –emission with the major target of gender balance in the beef sector. As Government, we hope that if the project is fully implemented, it will increase farmers’ earnings from the livestock sector thus improving their standards of living.”

The Corridor roughly runs north-east to south-west across the country. Money will be spent towards creating a conducive environment for competitive and improving beef production to meet rising demand both locally regionally and internationally.

Western and Northern regions of Uganda are the main producing areas, but Uganda’s beef sector is mostly dominated by a traditional pastoralist and agro-pastoralist system and only a small commercial ranching segment which however is widening faster in recent years. Uganda’s beef is ranked 5th best in the world because of its yellow fat that does not contain cholesterol mainly because the cows are naturally grazed.

Several modern abattoirs are to be built in the 24 districts which is expected to drastically improve hygiene which is a key factor in the beef industry.  For many decades now cattle for slaughter has been ferried in to the capital, Kampala over long distances very unsightly conditions.

Masindi Ddstrict chairman, Cosmas Byaruhanga said their livestock farmers are faced with challenges of water for animals most especially during the dry season. He asked the government to come up with immediate interventions.