Seven months to the day it commenced services out of Entebbe, Etihad Airways expanded its East […] 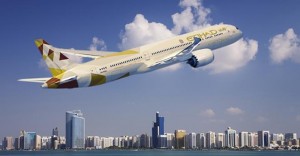 Seven months to the day it commenced services out of Entebbe, Etihad Airways expanded its East African footprint with the launch of flights to Dar es Salaam, its third point of service in the region.
The inaugural flight from Abu Dhabi touched down at Julius Nyerere International Airport at 13 hours local time, launching a service that will connect the Tanzanian capital to the capital of the United Arab Emirates daily.
Like the sister services to Entebbe and Nairobi, the Dar es Salaam service is operated by a two-class Airbus A320 aircraft with 16 Business Class and 120 Economy Class seats.

“Dar es Salaam is a wonderful destination for tourists seeking to experience the great culture and history of Tanzania, and provides the gateway to numerous national and international tourist attractions, including Mount Kilimanjaro, the wildlife-rich national parks of the Serengeti, and the spice island of Zanzibar.

“The UAE is also a major trading partner with Tanzania and our new point-to-point services strengthen the two-way flow of trade and commerce between the two countries,” Barranger said adding that the flight schedule was optimised for convenient onward connections between Tanzania and key destinations such to the Indian subs-continent and China.

Commenting on the value the flight will offer to Africa bound passengers Barranger commented: “Not only does this service provide our guests with direct access to an exciting new business and tourism destination; it also further strengthens our presence in East Africa and across the African continent.”

Its ninth route to the continent, the Dares salaam service caps a decade of Etihad’s expansion into Africa since it first launched flights to Casablanca in November 2004. The carrier plans further expansion with a new service to Rabat planned to launch in early 2016.