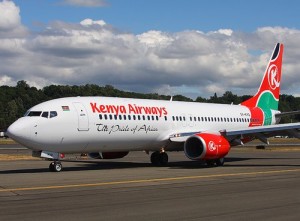 Combined with what KQ’s competitors Ethiopian, Emirates, Rwandair, Qatar and SAA fish out of Entebbe, Uganda is a significant air transport market.

According to research conducted by Routes Online, Johannesburg was KQ’s biggest international route out of Nairobi with 392,234 passengers carried by the airline between the city pair during the year. This was followed by Entebbe with 388,517 passengers. Dar es Salaam came third with 347,224 followed by Dubai at 267,822.

Mumbai on the Indian sub-continent was also a significant market for Kenya Airways beating both Amsterdam and London, key connecting points for KQ in Europe. Mumbai gathered 218, 263 passengers against Amsterdam’s 175,500 and London Heathrow’s 170,820.

Bangkok, Thailand has also developed into a sizeable route for the Kenyan carrier with 167,544, way ahead of Paris’ 151,632.

Juba takes tenth position with 137,860 passengers during the year.

With roughly only 30 percent of KQ’s traffic out of Entebbe terminating in Nairobi, the numbers suggest a soft underbelly that can be exploited by a regional point to point airline.

Domestically, Nairobi Mombasa was the biggest route for KQ, posting 635,050 passengers, followed by Kisumu with 275,328 passengers.

June 7, will see the introduction of a third service to Johannesburg. The service will operate three times a week using an Embraer E190.

The long awaited service to New York John F Kennedy will launch towards the end of October.