June 22—Eng. Irene Muloni, the energy minister, has taken up President Yoweri Museveni’s concerns over the […] 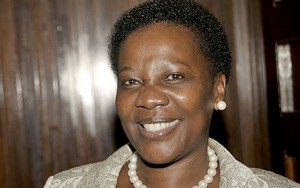 Eng. Muloni said it is the responsibility of the power firms to deliver their services at affordable prices.

“There is an appalling low access to electricity, high tariffs and low operation efficiency. I challenge the players in generation, distribution and transmission segments to collectively perfect their act,” she said during the inaugural electricity supply industry (ESI) chief executives forum in Kampala during mid-week.

On several occasions now, President Museveni has criticized the terms of the power purchasing agreement with Bujagali Energy Limited (BEL), the private owners of the 250MW Bujagali hydro-electric dam, currently Uganda’s biggest single supplier. The government is now pushing for an extension of a corporation tax waiver (which expires in financial year 2016/17) for BEL to at least keep the unit cost at the present 11 US cents to avoid even higher rates.

Figures show that only 20.4% of households in Uganda have access to grid electricity with the majority being urban-based. Eng. Muloni said this is an obstacle for a nation aiming for middle-income status by 2020. She said, “Government wants all Ugandans to have access to electricity. It is your responsibility to ensure that you deliver the service at an affordable price. Energy is very critical in modernizing a society. It is your challenge to ensure that you sensitize consumers about using your product if you are to minimize losses.”