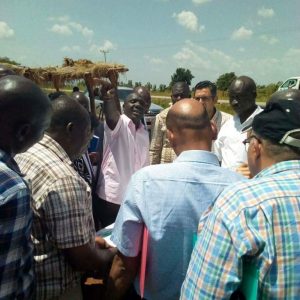 August 9, 2018- Egypt and Uganda have taken preliminary steps to implementing a 4MW solar power project under a grant provided by the Egyptian government last May.

A team of Egyptian engineers were in the country last week to conduct a site survey ahead of shipping equipment for the project.

The project will be the third large solar power station to be implemented after Access Solar’s 10MW station in Soroti and Tororo North Company’s 10MW installation just outside Tororo municipality.

According to Mr. Wilson Wafula, the Commissioner for Renewable Energy in Uganda’s ministry of energy, the Egyptian government has provided all the equipment and engineering services related to the project for free while Uganda provide land and the cover the cost shipping from Mombasa to the site as well as insurance and local taxes.

According to the implementation agreement signed in May, the Egyptian team will hand over the keys to the project within 12 months from the date Uganda hands over the site to them. Wafula says the ministry has already secured the site and is working to hand it over next week.

The power station will be connected to the grid through Tororo substation.

Wafula added that besides easing access to energy for the local community, the plant would be used as a training ground for students of  Busitema University in renewable energy.