October 27—Ecobank Transnational Inc, the Lome-based financial institution with  subsidiaries across East Africa, made a profit-after-tax […] 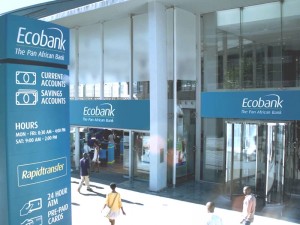 The bank is cutting back on new loans in a bid to limit a further increase of NPLs, but intent on expanding its digital platforms.

October 27—Ecobank Transnational Inc, the Lome-based financial institution with  subsidiaries across East Africa, made a profit-after-tax of $227 million from revenues of $1.4 trillion during the first nine months of 2017.

Ade Ayeyemi, the Group CEO said during mid-week,“Our results reflected the benefits of diversification and the progress made in executing our strategy to positioning the company for long-term growth. Actions we took around reducing costs have shown positive results and were evident in improvements to the cost-to-income ratio for the Group, and particularly for Nigeria.”

He said, “We expect further efficiency gains to come from ongoing right-sizing of our Central, Eastern, and Southern Africa region and subsequently the rest of our West Africa regions.”

Revenues for the pan-African bank were up 4% compared to the same period last year, but profits were down 19%. Ecobank has operations in early 40 countries on the continent and a presence in western Europe, the United Arab Emirates and China.

Total customer loans at $9.3 billion, decreased 7%, in a management strategy to reduce lending in the current operating environment, while focusing intensely on recovering loans where interest and principal payments were past due.

Ayeyemi said, “With the operating environment still subdued, albeit showing signs of recovery, asset quality indicators remain high and will stay at these levels for a few more quarters. In response, we have reduced lending activity, continued to strengthen risk management processes, and are engaging constructively with our customers to make good on their past-due loan payments.”

Excluding Nigeria, customer deposits increased by 1% to reach $14.1 billion, while the cost-to-income ratio improved to 61.7% from 65.5% in September 2016, even taking into account a one-off restructuring cost of $9.3 million for the Central, Eastern, and Southern African region.

Ecobank is also intent expanding the online options. “Our commitment to creating a digital bank is progressing strongly. The number of mobile app downloads, merchant acquisitions, and merchant processing volumes have increased. Ecobank OMNI and Bank Collect, both digital cash management solutions for our commercial and corporate clients, are making it easier for them to efficiently pay and receive cash,” Ayeyemi said.