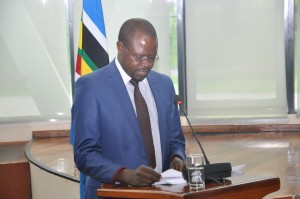 While tabling the budget proposals for 2017/18, Maganda expressed concern about late remittances from EAC members and declining Development Partner support.

The figure is up from $101,374,589 for the previous financial year (2016/17), but according to sources still modest in light of the demands placed on the EAC Secretariat and its associated institutions.

However Maganda was bullish over the Community’s economic prospects. “The real GDP in the EAC is estimated to have grown by 6.1% compared to 5.8 % growth recorded in 2015,” he said.

Once again, nearly half of the money or $52,868,638, is coming from Development Partners and this remains a cause of concern since EAC member states are known to frequently delay their remittances to the Secretariat in Arusha. The European Union is the leading multilateral donor to the EAC while Germany leads in bilateral terms.

Maganda told legislators, “Mr. Speaker, the key anticipated challenges during the implementation of Community programmes and projects include persistent delays in remittance of funds from Partner States and Development Partners and limited financial resources overall, with the budget declining yet the demand is increasing on the Community to deliver more services to East Africans. There is also reduced support from Development Partners”, the Minister said.

“Mr. Speaker, the Community will closely follow-up on the remittances by Partner States to facilitate timely implementation of programmes and implement the institutional review as per the directive of the 17th Summit of the Heads of State,” he said.

With the theme, ‘Accelerating Implementation of the EAC Integration Agenda’ the 2017/2018 budget prioritizes consolidation of the Single Customs Territory (SCT) to cover all imports and intra-EAC traded goods, infrastructure development in the region and further liberalization of free movement of skilled labour across the region.

Maganda said, “Delayed harmonization of national laws that impact on the implementation of the EAC Common Market Protocol and under-staffing, which is seriously impacting on effectiveness and efficiency in implementation of projects and programmes are other challenges, we need to address.”