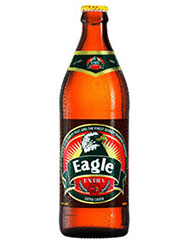 March 30, 2018 – In perhaps the biggest win for Made in Uganda in recent times, Nile Breweries developed Eagle lager has expanded its presence to seven African markets.

Although officials at the In-Bev owned beer maker did not respond to our request for information, 256BN has learned from independent sources that the brew that is based on Epuripuri, a variety of sorghum developed specifically for beer production by Uganda’s Serere Research Station is being produced in Zimbabwe, Tanzania and Mozambique among other countries where In-Bev has operations.

“It has been given local names to rhyme with local circumstances in some of these markets,” said our source who gave the example of Mozambique where Eagle Lager is branded as Impala.

The brand that has been on the market for twenty years in Uganda was the result of collaboration between SABMiller that owned Nile breweries then and its Ugandan subsidiary. While SABMiller conducted research into the formula, Nile Breweries and NARO developed the variety of sorghum that would yield the highest levels of alcohol and yet would not be palatable so as not to compete with food.

SABMiller made several additions to Nile Breweries brand stable with the introduction of Chairman’s ESB which also traded as Bingwa in Tanzania. It later introduced Castle-Lite and Nile Gold and Club lemon giving the company a foothold across the different segments of the beer consuming public.

256BN has also learnt that plans are afoot to introduce Budweiser on the Ugandan market mid this year.