March 5, 2018 in Communications, Companies by Editor 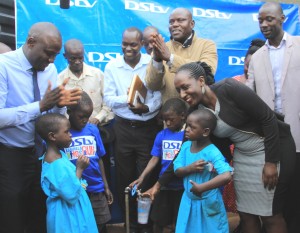 Nakabazzi (right) officially turns on the tap as Ziribasanga (in brown jacket) and Kiwanuka (left) along with school staff and pupils applaud.

During the handover ceremony held at Kakoge Primary school, Phoebe Nakabazzi, DStv Marketing Manager said, “The DStv Kampala Kids Run management is grateful for all the children that participated and most importantly the parents that allowed their children participate in the run.

She said, “Your immense generosity has enabled us provide safe clean water to selected schools. Through this initiative, we believe more children will be guarded from contracting water borne diseases. Today marks the accomplishment of the2017 DStv Kampala Kids’ run pledge and we are pleased that we have fully delivered.”

The donation is in line with the run’s main goal of providing safe clean water in primary schools. The event is to become an annual event.

About UGX 20 million was collected from the run which attracted over 4,000 children between 4 -14 years from over 20 schools in Kampala and Entebbe Districts. Free tickets were given to Universal Primary Education (UPE) schools to support their participation in the run.

Robert  Ziribasanga, LCV Chairman for the district, congratulated the children who participated in the run. “It is inspiring to see young children come together for a great cause to support each other. We should therefore prioritise children’s well-being as we seek to support and encourage their skills. The contribution of water tanks couldn’t have come at a better time since the country has been experiencing a long drought season and as such access to water in less privileged schools is a challenge.”

He said, “Initiatives as the DStv Kampala Kids run present an opportunity not only instilling goodwill among children at an early stage, but also saving our communities from disasters. Our hope is that the event continues to grow bigger and confirm government support in forthcoming events.”

The DStv Kampala Kids Run comprised of two races – 1.5 kilometres and three kilometres. All the runners regardless of their rank in the race were rewarded with certificates of participation while the top 10 won themselves medals courtesy of DStv Uganda. The company also rewarded the two winners of the races with HD Explora decoders.

Nakabazzi said, “DStv took on this initiative because it speaks into sports as a cornerstone for the brand. Our goal is to encourage the young generation to engage more into different sports as they strive to make a difference in society.  We also believe that sportsis key to national development that is why we hold it with high regard and endeavour to support initiatives such as this.” 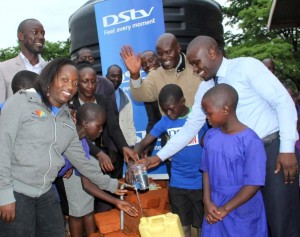 Tina Wamala (left), the DStv spokesperson joins the excited children and other officials try out the water.

Muslin Kiwanuka, CEO of the Kampala Kids run said,  “These children have been challenged moving miles and miles to access water to their schools and spending less time in the classroom. We are glad that today we have reduced this burden for them and now they can concentrate on their studies.”

“We are immensely grateful to our sponsors especially DStv for coming on board with us on the Kids Run. They have demonstrated that they have a shared vision of making a positive impact on the lives of our future generation. The objective of this run is to train our young ones to have a giving heart and to look out for the disadvantaged. We look forward to strengthening future Kids Run editions alongside partners like them,” he said.