October 26, 2018—The East African Community (EAC) Secretariat’s top donors, who to date have handed over […] 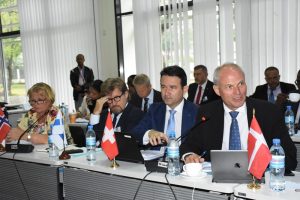 October 26, 2018—The East African Community (EAC) Secretariat’s top donors, who to date have handed over half billion dollars in five years, were in Arusha this week to finalise a financial package for next year that avoids duplication in funding various integration projects.

“With this revamped collaboration, the EAC has been able to progress the integration agenda with remarkable speed,” EAC Secretary General, Amb. Liberat Mfumukeko said during the talks at the headquarters.

The member states of the EAC are Burundi, Kenya, Rwanda, South Sudan, Tanzania and Uganda with total population of around 150 million people. In terms of bilateral financing, Germany has been the biggest donor including construction of the EAC Secretariat headquarters in Arusha several years ago.

According to a statement, Roeland van de Geer, the Head of Delegation of the European Union in Tanzania said the forum is valuable for Development Partners to ensure an alignment of their respective cooperation programmes with those of the EAC.

He also appreciated the willingness of the EAC Secretariat to engage on sector specific priority areas  particularly on key regional priorities given the wide and ambitious portfolio of EAC.

For the past two years, the EAC has been the fastest growing region posting a 5 percent surge, almost double the sub-Saharan average. Trade has been boosted by up-grading major frontier points to One Stop Border Posts that resulted in savings for business and substantially less paperwork.

However increasing competition among the regional manufacturers dealing in similar items has led to recriminations and the slow removal of non-tariff barriers.

Amb. Roeland assured the EAC that all Development Partners are willing to support the key priorities of as EAC articulated in the Fifth Development Strategy endorsed in February 2018.

Amb. Mfumukeko said during the past half decade, the main contributors to the EAC Development Programmes  have been Germany, the United States through USaid East Africa,t he European Union (EU), and the African Development Bank. Total German contributions now stand at 286,541,354.42 euro;  USaid, $237,823,555; and the EU at 65,000,000 euro.

On the other hand, the partner states are still slow in remitting their annual contributions which continues to ties up the Secretariat’s operations.

Earlier this year,  Amb. Mfumukeko said, “The reality of the matter is that partner states are slow in disbursing their commitments, as at the end of December 2017, only 40 pc had been disbursed, this calls for serious prioritising of the available resources and ensure critical activities are implemented.”

Plans are to evolve into a monetary union before 2025 and a single currency after previous phased implementation of a Customs Union then a Common Market between 2004 and 2015.

He said the EAC has transformed itself from a loose co-operation framework into a fast-emerging, solid and dynamic regional economic bloc.  He said the EAC has evolved strong institutions and vigorous programme delivery, which are already making an impact on the economies of the region.

Amb. Mfumukeko  said the EAC has been ranked as first among the eight Regional Economic Communities (RECs) from the recently Africa Regional Integration Index Report launched  in Addis Ababa through the collaboration between the UN Economic Commission for Africa (ECA), the African Development Bank (AfDB) and the African Union Commission (AUC)

He however called for more partnerships with the business community and, in particular, the East African Business Council in industrial development through investment in private sector development, improvement of doing business environment and finally an enhance.