February 13, 2017 in Business, Investment by Editor 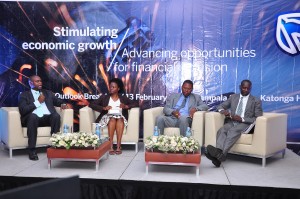 Gideon Badagawa (second right) was one of the the panelists at the Stanbic Bank Uganda forum. On the extreme left is Patrick Mweheire, who was the moderator. Rachel Sebude (World Bank) and  Moses Byekebye (Finance minstry) were the other members.

February 13 – Economists say an improved Uganda outlook will need more focus on mobilizing domestic savings as an alternative to foreign debt in the wake of the challenges resulting from the global economic slowdown which is only easing now after nearly 10 years.

“We need to close the savings gap by improving on the savings levels in the economy beyond the current figures. Current statistics indicate that the savings levels for the country stand at 15 percent and these levels are too low for us to continue talking about boosting public investment, because we cannot invest unless we have money to back our investment prospects,” Gideon Badagawa the Executive Director at Private Sector Foundation Uganda said.

He was speaking during a panel discussion at the annual Stanbic Bank Uganda Economic Outlook Breakfast under the theme, ‘Achieving Inclusive Growth: What Structures does Uganda Need?’

Due to limited alternative financing, the economy continues to depend on debt and short term financing to finance its projects most of which are long term. “But with available long term financing from savings schemes such as the pensions scheme and capital markets, Uganda stands a better chance to boost her investments at a cheaper cost,” Badagawa said. A regulatory authority is already in place, but Uganda is yet to fully liberalise the pension sector.

He said once this is achieved, “Then we can focus our synergies on what kind of investments the country needs like boosting our exports, widening the tax base and boosting agriculture.”

Uganda needs to boost investments if it wants to grow its GDP to the above projected levels of 4.5 percent and Badagawa believes that with its own savings, this is achievable in spite of the challenges in the global economy.

Moses Byekebye an Advisor of Economic Affairs at the Ministry of Finance and Economic Planning said the government is already on track.

“This year we want to lower domestic borrowing to allow the private sector get into the markets to access credit and boost their businesses and also spare some for saving. We are looking at alternative means of financing beyond the local banks, World Bank and the African Development Bank. Without savings, then borrowing becomes inevitable,” Byekebye said.

He said the government will also focus on improving the vibrancy of capital markets to interest more people to participate in these markets as another form of encouraging savings among the people in addition to pension savings schemes for long term financing.