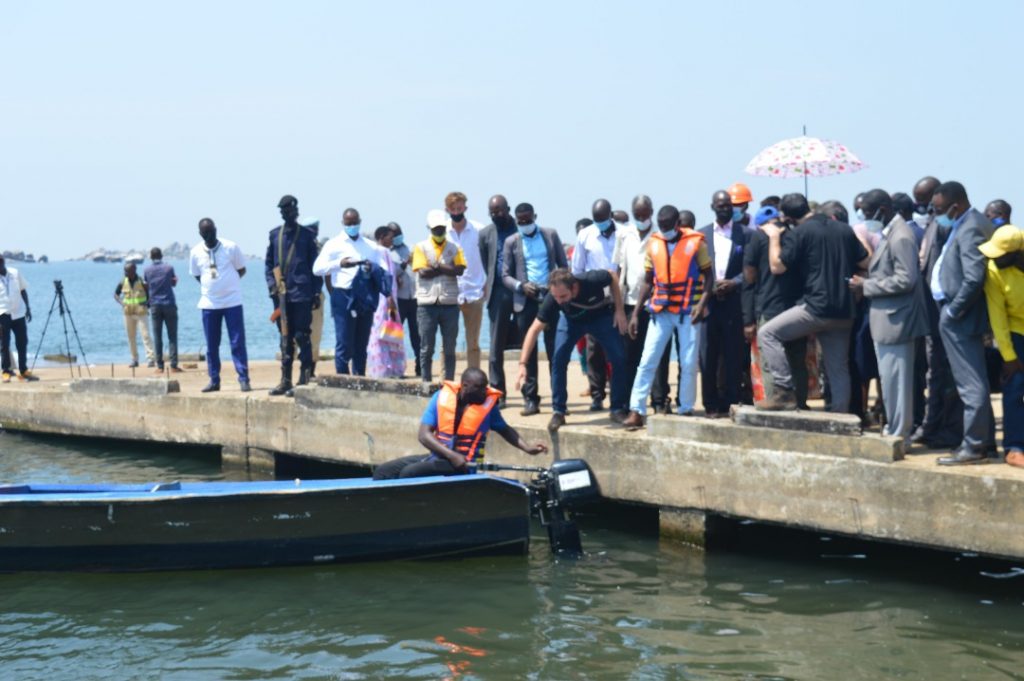 Umar, a boatman on Dolwe Island, demonstrates how the electric outboard engine works on his canoe.

Until Engie Equatorial’s 0.6MW solar power station went live on Dolwe Island this January, Umar’s life was hemmed in by limitations.  To go out fishing, his outboard engine would burn 15 litres of gasoline for the expedition. At prices as high UGX8000 a litre on the island, it was a tall order to turn a profit. By the time he landed a consignment of ice for his cool-box from the mainland in Namayingo, up to 40pc would have been lost to melting. And in the humid climes of Lake Victoria, there was no guarantee that the sun would be out to help dry his haul of Sliver fish.

Like many of the 15,000 residents on the island, Umar’s options expanded on January 14, when Ruth Nankabirwa, the minister for energy presided over the commissioning a solar powered mini-grid that is bringing the basics of modern life to this isolated community. Besides providing power to a commercial water purification plant that also produces ice, the grid also powers a fish drying machine and charging stations for electric motorbikes and outboard boat engines.

Bodawerk, a pioneer Ugandan high-energy density electric battery maker and the vendor of the electric engines and motorbikes; is giving them out under a lease model, which lowers the cost of access and ownership for the islanders.

“Our dream is to electrify all the islands of Lake Victoria and Dolwe should be an example. What we are looking at today is the future of not only access to energy but national bankability of energy systems on the continent. Our focus is on what people will do with electricity- ice, mobility and fish drying,” Ricardo Ridolfi, the chief executive officer of Engie Equatorial said during the official launch.

“Energy improves the quality of life of people but it is better if it increases peoples’ incomes, entrepreneurship and the way people use electricity for the growth of their businesses. We want to replace diesel with solar energy for agro-processing, transport, telecom, and small businesses,” added Gillian Alexander Huart, the chief executive of Engie Energy Access, a joint venture partner in the Dolwe mini-grid project.

The power is available to consumers at a commercial tariff of UGX 1432Kwh. Clean water will improve health and the local health facility will be able deliver better services. Fishermen who were getting ice from mainland were buying 40pc more because of melting along the way, he observed.

“Off-grid is key to our strategy for increasing access to clean energy. Through initiatives like this communities are able to access clean energy faster and cheaper than if we were to focus only on the grid option. Having modern energy unlocks access to better services,” Energy minister Ruth Nankabirwa said.

Nankabirwa further revealed that while 57pc of Ugandans now have access to some form of electricity, off-grid solutions such as the grid in Dolwe, accounted for 33pc of access. The government has so far launched mini-grids in Lamwo district while more were planned for Rubirizi Kasese and Isingiro districts. The government of the Federal Republic of Germany is funding the projects while the Uganda government build the distribution lines through its Rural electrification Agency.

Irene Batebe the Permanent Secretary in the ministry of energy observed that the Dolwe Island mini-grid would be a pace setter for a long time.

“Isolated grid systems are the future of electrification and, they will play a significant role in addressing issues of clean energy. This project aligns well with the National Development Plan3 and Vision2040, where we seek to ensure access to clean energy for every Ugandan by 2030 under the national electrification strategy,” she said.