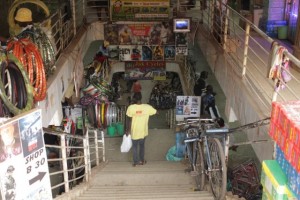 The issue of paying rent in dollars remains a thorn in the side of many city traders especially when the shilling weakens sharply.

March 13—Traders and shop operators in the Kampala Central Business District want protection from sudden rent hikes based on the depreciation of the Uganda shilling against the US dollar on the foreign exchange market.

Everest Kayongo, the Chairperson, Kampala City Traders Association (KACITA) said, “Traders continue to face harassment from the landlords, like continuous rent hikes without prior notice, unfair dismissal for failure to adjust to the rent charges and the continuous charges of rent in dollars.”

He said, “If we do not get to hear from Parliament, we shall force it to act through an industrial action, because we need the Bill to protect the traders since legislation is the best solution to these issues.”

Several traders have declined to open for business until the matter is sorted out. They are attempting to hold talks with landlords over something that has remained a thorn in their sides whenever the shilling weakens against the dollar. They say this dollarization of segments of the economy hurts business.

On the other hand, those who charge in dollars say it is a way to hedge any risks associated with currency fluctuations and inflation. They add that Uganda has a liberalized economy in which the rights of private property are well enshrined in the law.

Kayongo said the Landlord Tenant Bill (2013), which is currently in draft form, will address most of the controversies between the landlords and tenants. He said it has been in the offing for some time now, but presently lies in limbo.

“In 2016, we tried to follow up on the progress, but even the authors of the Bill, the Ministry of Lands professed ignorance on the progress of it, until we opted to bring the Bill as a Private Members Bill,” he said.

Moses Lutalo, the Head Commercial and Residential Portfolio at Knight Frank (Uganda) said the international real estate consultancy has prepared a White Paper on the matter for the government. He hoped their proposals are considered before the Bill is passed, because in its current form the proposed legislation seems a threat to landlords.

In their latest Uganda Market Update for the second quarter of 2016,  KF points out that implementing the draft Landlord-Tenant Bill, which among other things wants the payment of rent in dollars abolished, will have a negative impact on the real estate sector, especially for developers whose financing is in foreign currency.

Kayongo believes an arbitration process where the two parties can meet to address such issues should be in place and find solutions to some of these problems instead of evicting tenants who cannot raise the shilling equivalent fast enough.