August 27, 2018—Uganda’s second biggest lender by assets, dfcu Bank, saw its first six months profit-after-tax drop sharply from UGX114.1 billion ($30 million) in 2017  to UGX41.3 billion (nearly $11 million) at the end of June 2018 due to the costs of integrating the former Crane Bank business. The bank is a subsidiary of the dfcu Group through holding company, dfcu Limted. 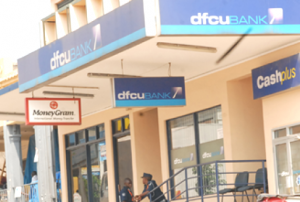 In the first six months of this year customer deposits grew by 10 pc mainly driven by the shift to online services and confidence in the brand.

However the group asset base remained stable UGX 3 trillion (nearly $800 million) as at June 30, 2018. while loans and advances to customers continued to grow by nine percent which is above market average for the period. Customer deposits grew by 10 pc over the period under review, mainly driven by the ongoing digitization program and customer confidence in the dfcu brand.

Once the country’s fourth largest financial institution, Crane Bank ran into insolvency and was finally seized by Bank of Uganda at the end of 2016, before its assets were later sold off to dfcu bank in early 2017.

According to dfcu Bank, the results for the period ended June 30 2017 included a one off bargain purchase of UGX121.8 billion. The bargain purchase is required to be amortised over a period of up to five years and hence the 2018 results include an amortization charge of UGX 12 billion in respect of this item.

It continues that as per the requirements of IFRS 3-Business Combination, dfcu Group was required to carry out a fair valuation of the assets acquired and the liabilities assumed. The fair valuation exercise resulted into a fair value gain of UGX121.8 billion that was recognized in the results for the six months ended June  30, 2017. In order to comply with the IFRS standards, dfcu Group has to amortize the gain over an average period of five years. This amortization has been included in the results for the 6 months ended 30 June 2018′.

Total operating costs grew by six percent during the six months’ period to June 2018 compared to same period in 2017. This increase was mainly attributed to two major items: the amortization of the bargain purchase (UGX12 billion) and continued investment in the digital infrastructure online with its strategic aspirations. If adjusted for the amortization, the overall cost then the income ratio would be 58 pc.