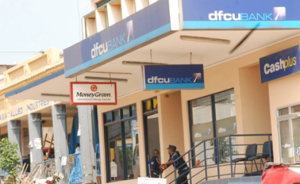 March 21- Dfcu Bank Limited has posted an after tax profit of UGX 46 billion (nearly $13 million) for the year ending December 2016.

This represents a 25% rise from the UGX 37 billion recorded the previous year and comes against background of a difficult year for Uganda’s banking sector.

In terms of assets, the bank grew its asset portfolio by UGX 1.7trillion from UGX 1.6 trillion in 2015.
Shareholders will receive a cash dividend of UGX 25.19 per share.

The Bank’s performance comes at the back of a tight operating environment in the banking sector which saw many banks handicapped by relatively high levels of non-performing loans (NPLs). Borrowers were finding it much more difficult to pay back their loans given the high claiming the interest rates being charged amidst a  slow economy were punishing them.

For a bank which ranked in sixth position according to rankings released by Bank of Uganda for the year ended 2015, it is still too early to tell which position dfcu Bank will take up, especially after taking over the more viable parts of the now defunct Crane Bank which was the fourth largest bank by assets in 2015.