September 28, 2018—A campaign to promote financial literacy in Uganda has won dfcu Bank recognition at […] 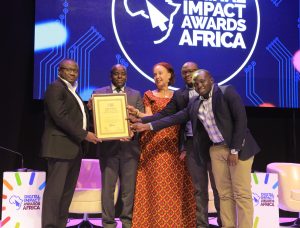 The dfcu Bank team receive their award at the gala event held recently in Kampala.

The bank has been at the forefront on driving a savings and investment culture since 2007 with the introduction Investment Clubs program designed to foster group savings.

Over the years, the program has grown to over 10,000 Investment Clubs that cut across all segments including students, the professionals, women and youth. The now annual ‘Battle for Cash’ competition won dfcu Bank the top accolade for financial literacy.

Michael Mwesigwa, Senior Manager, Investment Clubs and SACCOS said the award reflects the positive impact of their endeavours. “dfcu Bank has consistently and deliberately availed financial literacy to thousands of people across different segments. Our Investment Clubs customers receive regular skilling which covers a wide range of topics and concerns.”

He said, “We are proud to receive this award and will continue to impart these skills which we believe are crucial in transforming the savings and investments culture in Uganda.”

As of June 2018, dcu Bank had assets of UGX3 trillion (nearly $780 million) and an unaudited after tax profit for the first six months of this year of UGX64.4 billion compared to full year audited net earnings of UGX147.8 billion in 2017.

‘Battle for Cash’ is in form of a television show in which participating clubs have a chance to pitch their business plans to a panel of judges over a period of three months, get exposed to different business principles and stand a chance to win funding for their business projects alongside business advisory services for a year.

In 2017, over 200 clubs applied to enter the competition; 20 clubs were selected and pitted against each other in a competition that saw Geneber Outspan Organic Farmers from Amolatar (in northern Uganda) emerge as overall winners walking away with a cash prize of UGX 25 million (about $6,500).

This year, over UGX100 million (almost $26,000) in prize money has been set aside for the best performing clubs with the overall winner taking a cash prize of UGX30 million.The competition has special categories for women and youth clubs on account of their contribution to Uganda’s economic development.

According to the organizers of this year’s awards, the 2018 Digital Impact Awards were to recognize and reward individuals and organizations across Africa that are spearheading the use of digital tools to not only enhance financial and digital inclusion but also lead to continental economic transformation.