May 30, 2018—Provision of a universal basic income for the elderly in some parts of Uganda […]

May 30, 2018—Provision of a universal basic income for the elderly in some parts of Uganda has improved their general welfare, but implementation remains a sore point mainly due to delayed payments. The selected recipients get UGX25,000 a month (just over $6.50). 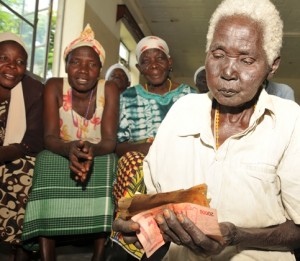 Every month selected people aged 65 and older are supposed to get UGX25,000 under the Senior Citizen Grant.

Two years ago, the UK’s Department for International Development (DfID) and Irish Aid agreed to support the scheme with £57.1 million and Euro 15 million respectively (nearly UGX330 billion in total) while the government  was to contribute UGX149 billion until 2021.

However, Members of Parliament under the Uganda Parliamentary Forum on Social Protection (UPFSP) have voiced their complaints saying that this has had  a negative impact on the overall Social Assistance Grants Empowerment (SAGE) Programme.

The Senior Citizen Grant (SCG) is a major component of SAGE where those who are aged 65 and older are supposed to receive a monthly payment of UGX25,000.

Legislators wondered why after parliament passes the budget to finance the programme, on many occasions the government chooses to then slash the money.

The SAGE programme is being piloted in the most disadvantaged districts which include Amudat, Apac, Kaberamaido, Katakwi, Kiboga, Kole, Kyankwanzi, Kyegegwa, Kyenjojo, Moroto, Nakapiripirit, Napak, Nebbi, Zombo and Yumbe, catering for 154,000 beneficiaries.

Reacting to these concerns, Peace Regis Mutuuzo, the state minister for gender, labour and social development said the government wants all the money under the programme released on time, but the problem lies with revenue collection. She said sometimes delays also arise from the late release of counterpart funding from the Development Partners.

The proposed budget for SAGE during FY2018/19 is UGX32.88 billion but according to Opolot this is a shortfall on what they as legislators wanted. “Although parliament increased the budget for the SAGE programme, the money is not enough  because we expected the government to provide counter-funding of UGX40.34 billion which yet again leaves  a deficit of UGX7.46 billion,” he said.

Commenting on the performance of the scheme in Kiboga District north west of Kampala, the Chief Administrative Officer Sarah Nakalungi told legislators that since implementation, 7,648 elderly persons have been enrolled on the programme.

“In Kiboga district  the programme is running smoothly despite other challenges  since 2011 approximately shs 8.7 billion  has been injected into the district thanks to  government of Uganda and Development Partners  that have enabled  the success  of SAGE  in Kiboga Disrict,” she said.

She said SAGE has changed the lives of the elderly, saying with the UGX25,000 some of the beneficiaries have managed to improve their uptake of health services and afford boda boda (motor bike taxis) transportation. The programme has also helped the aging people to eat better.